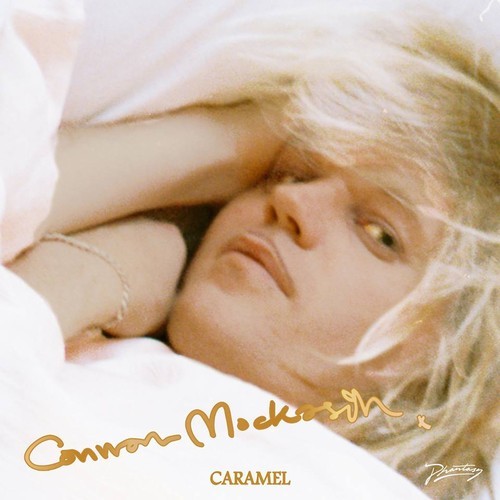 Connan Mockasin’s second album is a spin on classic soul, as recorded by an off-kilter freak folker from New Zealand while cooped up in a Tokyo hotel room for a month – a far cry from the wilderness and night skies of his native New Zealand that fueled his debut Please Turn Me into the Snat. Mockasin chose the word Caramel for the album’s title since it works so well as a descriptor for the sounds found within; the eleven tracks are mostly made up of smooth, rich bass lines and lustrous guitars, all easily suited for romantic devotions to be laid on top of them.

This is where Mockasin’s voice enters the picture. It’s full of character, but not necessarily the type that matches the alluring musical surroundings, nor the soul artists that inspired them. This mismatch results in tracks like “I’m The Man, That Will Find You”, sung in pre-pubescent tones. There’s just about enough psych in the seductive guitar lick to sell his shrieking, but his aspirations work better on tracks where he sings coyly in his regular pitch, like “Do I Make You Feel Shy?” and the closing “I Wanna Roll With You”.

However, before you get to that final track you’ve got to go through a five-minute groove set to the sound of a woman weeping in “Why Are You Crying?” and the five-part “It’s Your Body”, which is also low on lyrics and veers from squelchy kraut synths to periods of solo guitar plucking. Somewhere in the midst of it all, there’s purportedly a story about a man in love with a dolphin and a car race that concludes with a crash. But, there are already too many baffling things going on to try and decode that bonkers narrative on top of it all.

Essential Tracks: “Do I Make You Feel Shy?”, “I Wanna Roll With You”