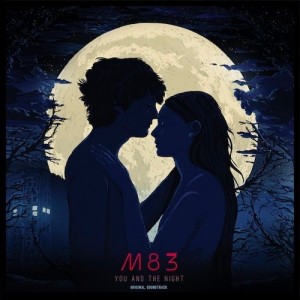 Music has always romanticized the dark luster of the night. It’s seen in countless ballads, from Julee Cruise’s seething “Into the Night” to Sky Ferreira’s latest, the triumphant Night Time, My Time. On You and the Night, French producer and electronic soundscape mastermind M83 joins in that tradition with the autumnal work he was born to create: a film score.

You and the Night is an invitation to the listener to embrace the chill of shifting temperaments and swaying identities. While Anthony Gonzalez’s last gloomy feat, “Midnight City”, was an involuntary dance track, he retreats into a more secluded place of contemplation on You and the Night, all strings and lapping echoes. On previous release Hurry Up, We’re Dreaming, the masterful was made visceral. The score to his brother Yann Gonzalez’s eponymous film is an exploration into something much more lucid, relishing open space instead of the bombastic electronic chills and thrills typically found within M83’s music.

Thankfully, for those unable to find You and the Night in a nearby theater, the majority of these tracks can stand alone outside the context of the film. The harps and distant echoing vocals of “Mon Enfant” evoke an emotional pang, even without the visualization of the scene accompanying it. The illustrious “Nous”, driven by interlacing echoes, strums, and strings, is a testament to Gonzalez’s meticulous arrangements and detailed compositions. Moreover, these are songs rather than interludes, long enough to be self-contained. In fact, the arresting, cathartic “Holograms” nears M83’s previous works.

In his newfound role as film score composer, Gonzalez expertly frames a narrative through sound alone. Even if you haven’t seen the film, M83’s music guides you through the characters’ journey of transcendence and internal revelation (and in turn, your own), propelled by bubbling falsetto vocals and striking instrumental crescendos. A man with an extensive discography, Anthony Gonzalez continues to work towards expanding the listener’s consciousness and his own boundaries an artist. If You and the Night is any indication, M83’s capabilities, whether in the daytime or the night, are limitless.