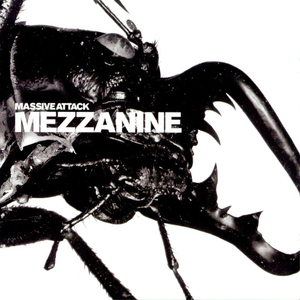 If your first exposure to Massive Attack dripped through Neo’s headphones in his first appearance onscreen in The Matrix, Mezzanine might always coat the walls of a cyberpunk neo-noir for you. That’s the world it envelops for me: a world that articulates the reflexive fear of technology’s growing dominance, the fear that the machines we owned would soon own us. Google Glass, the iPhone, and the NSA’s surveillance network hadn’t even been invented yet, but we were already plunging into nightmares of full-blown dystopia. We could already download kung fu.

There’s a violence that courses through Mezzanine, a subtle menace that the UK trio pricked at with their lyrics, but never fully traced. Through the aperture of lines like “she’s on the dark side” and “you’re lost and you’re lethal,” Massive Attack let you imagine an enemy that was always out of sight. They sculpted the shadows.

Darker, slicker, and more monstrous than the group’s fizzy first steps, Mezzanine relied on heavy sampling to braid together disparate threads in music’s history. Its birth was a messy one; Robert Del Naja (AKA 3D) allegedly ripped up each track again and again before he arrived at the final mixes. You can hear it, too. While Protection and Blue Lines sounded neatly composed, Mezzanine felt grown. The album blossoms in enormous space, bigger and deeper than the tight channels electronic dance music tended to fill. This was computer music aimed not at clubs but at headphones, computer music concerned less with how to engineer the future than with how to hack the past.

It’s easy to forget that the Velvet Underground, Led Zeppelin, and the Cure all haunt this album. You don’t think about Robert Smith on “Man Next Door”, but he’s there, counting drips like he did in 1979, only this time he’s surrounded by danger instead of boredom, as vocalist Horace Andy plots escape from a violent neighbor. Meanwhile, Jon Bonham pounds from the grave, the beat from “When the Levee Breaks” slowed down and stretched out almost beyond recognition. Unlike the mashup microgenre that looks to it, Mezzanine doesn’t hopscotch from one source to another. Nothing’s slapped together. It doesn’t want you to recognize its roots. Massive Attack roped together music not by time or place, but by a nerve no one had thought to tease out.

It may have harnessed millennial dread, but Mezzanine didn’t shy from awe at its own newly hatched textures. Since wrapped around the opening credits to House, “Teardrop” still shines as the record’s sole bright spot in a storm of metallic shadow. Neon harpsichord levitates the elusive lyrics, sung delicately by Cocteau Twins’ Elizabeth Fraser. Here, Massive Attack access the kind of emotional register that can’t be qualified as positive or negative, only intense, more euphoria and sadness to draw upon with each turn of the arpeggio.

Maybe it’s that ambivalence, that refusal to be pinned down, that landed Mezzanine so squarely inside the circle of “alt” kids that loved it a decade ago. Massive Attack was straight punk in my world. Mezzanine would blare on car stereos that otherwise only played marathons of Buzzcocks and Against Me! It bit just as hard in slow motion. If punk rock was a jackknife brandished in front of you, then Mezzanine was the cold steel of a gun nuzzling the back of your neck. We loved the threat of it just like we loved brazen aggression.

Massive Attack’s DNA is scattered everywhere ― the middle crunch of “Dissolved Girl” lies latent in Sleigh Bells’ twitchy backbone, and How to Dress Well owes plenty to the icy beauty of “Teardrop” ― but Burial must be their most direct descendant. Both acts cemented that lineage with a stunning collaborative 12” in 2011, though both tracks sounded distinctly Burial. You can’t tell where one artist begins and the other ends, because Burial designed his own mechanism by looking at Massive Attack’s. By listening to either, you’re grasping at glints in shadow.

At the end of Burial’s remix of “Paradise Circus”, Mazzy Star vocalist Hope Sandoval’s voice (unheard in the original) murmurs over and over, almost imperceptibly: “Let love flower.” Would she even be singing if it weren’t for Fraser’s “black flowers blossom”? Would we even have that image, that something could be dark, and poisoned, and still unstoppably alive? Would we still have this legion of young artists stitching together scraps on their laptops without that deep, echoed imperative in “Risingson”: “dream on”?