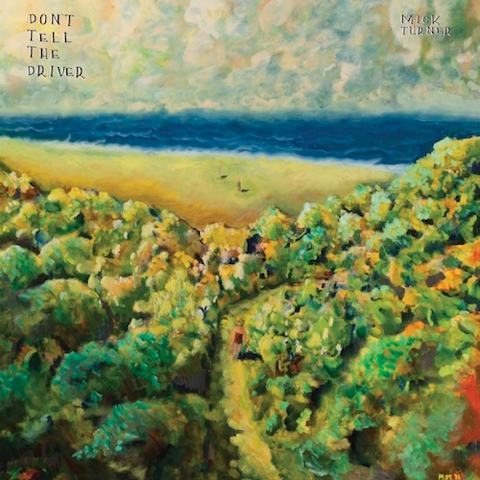 Though he’s released material on his own in the past, it’s been 10 years since Dirty Three guitarist Mick Turner put out a solo LP. Much like his band’s fusion of traditional and folk elements, jazz adventurism, and post-rock grandiosity, Turner’s Don’t Tell The Driver returns to stretch towards the sky, looping various grooves together until one makes sufficient impact to focus on. While this building of layers often takes on a mesmeric quality, Turner’s band occasionally seems to fall yawning into sleepy stretches of aimless ambience.

A handful of lyrical references, production wrinkles, and instrumentation choices sew together the album’s disparate melodies and atmospheres. Backmasked passages frequently act as segues, Caroline Kennedy-McCracken pops up for a few tracks to sweetly sing lines about the adventures of life and love, and shakers, hand drums, and other auxiliary percussion tools alternately quicken and sedate the musical river’s flow.

The opening duo of “All Gone” and “Sometimes” doubles in on itself in this way, similar rhythmic tools paired with staccato acoustic guitar and melodica to produce a hitching step on the former, legato keyboard and airy vocals added to the latter to smooth things over. “All Gone” builds in intensity, only to have “Sometimes” walk the same elements back the other way, the muted horn section of “Long Way Home” continuing the lull.

That beyond mellow deportment then dominates the majority of the album. The title track, for example, continues to elucidate the smoothed sky, only to leave patches of space where skitters and jumps of percussion, swells of melodica, and an incongruous flash of backmasked orchestration collect, in jarring and sudden antithesis to their long-developed surroundings. “Over Waves”, on the other hand, follows a reliable pattern of climaxes and falls, backgrounded visceral yowls and rich baritone vocals from Oliver Mann balancing with Kennedy-McCracken’s angelic harmonies. Shivering acoustic, far-off organ, and drum clatter builds and dies, only to reveal the slow-stepping arpeggio figure that acted as the track’s foundation to begin with. While the album brims with such expansive themes and stunning musicianship, it too often falls into low-slung ambience rather than explore the evocative power it demonstrates all too infrequently