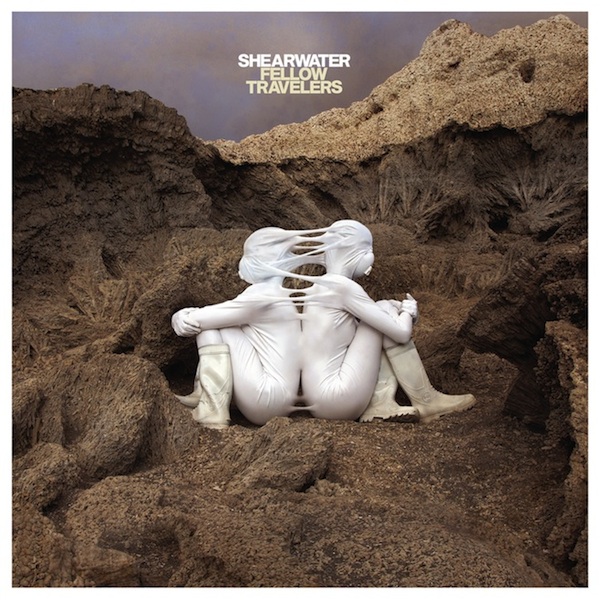 In Xiu Xiu’s original version of “I Luv the Valley OH!” (from their seminal Fabulous Muscles record), singer Jamie Stewart reaches the song’s titular phrase, on that all-caps, exclamation point-adorned “OH!”, the music drops completely out, and Stewart screams it, presumably redlining his recording equipment. On Shearwater’s version of the song, the second track on the band’s (mostly) covers record, Fellow Travelers, frontman Jonathan Meiburg reaches that moment, only to sing the note in the crystalline, fragile vocal tone for which he’s known. There are many moments on Fellow Travelers that evoke that same uncanny valley feeling, but that moment is the most obvious and the most telling.

The conceit behind Fellow Travelers is a neat one, with Meiburg covering songs by bands that Shearwater have had the pleasure of touring with. Additionally, he invited those musicians over to play on the record, but not on their own songs. It makes sense that– according to Meiburg– the record was never supposed to receive LP status; the project has the feel of something indulgent, even though Shearwater never sound, here or elsewhere, like a particularly indulgent band. This and the mishmash manner of Fellow Travelers‘ construction, while understandable, make it a vaguely unsatisfying listen.

The record’s best moments are its most organic: when Meiburg strips back the arena bombast from Coldplay’s “Hurts Like Heaven”, or the contemplative peacefulness of David Thomas Broughton’s “Ambiguity”, or the record’s lone original adaptive twist, their Okkervil River-esque transformation of St. Vincent’s angular “Cheerleader”. Those moments seem like naturally occurring ideas, not ones beholden to the album’s concept, tunes that the band could have been slipping into live shows for years. But, other tracks seem shoehorned in uncomfortably, like the band’s cover of Folk Implosion’s “Natural One”, or the band’s straight-laced, boring take on Wye Oak’s “Mary Is Mary”.

Fellow Travelers would likely have been better off in its original state: a few covers that Meiburg simply had to record, without any idea of a full-to-bloating LP. As a full-length record, Fellow Travelers includes too many songs that come off like that neutered high note as opposed to an original, undeniable, caterwauling scream.