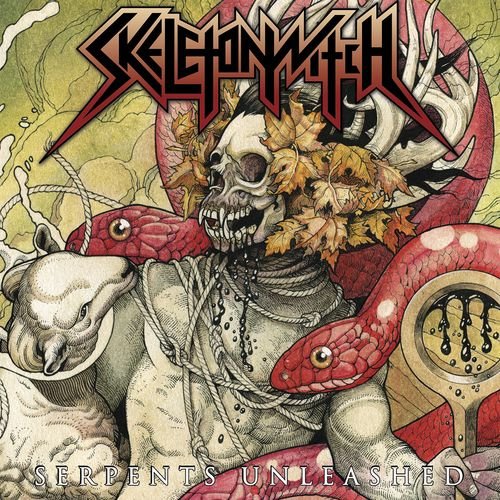 Artists that amalgamate styles as a means to squeeze new blood out of old stones frequently provide the Darwinian solution to boring music. Crossbreeding was key to evolution, right? But, in metal, amalgams and hybrids often become homogenized instead of developing into something original and fresh, and the standard techniques of modern music production only further exacerbate the problem, with things like triggered bass drums and Protools plugins rather than guitar amps. On Serpents Unleashed, Ohio quintet Skeletonwitch’s own blend of European melodic death metal, thrash, and black metal falls prey to flat production, which further stacks the deck against the band’s already ill-defined sound.

Skeletonwitch’s sonic formula on the new LP remains generally untouched. The album’s title track rips out of the box without warning and proceeds to pummel the listener with what can only be described as a passage of unabashed worship of Sweden’s At the Gates. A twin kick drum assault whips up a Scandinavian gale, as a duo of harmonized guitars lace through the band’s familiar thrash and chug. The demonic screaming that leads the mayhem sounds like a particularly direct affectation of At the Gates frontman Tomas Lindberg’s tortured howls, and while it’d be naive to dismiss idolatry and dramatic influence in extreme metal (or to deem such borrowing unacceptable, as any metal fan loves a band that carries the torch for a now defunct favorite), the devil is in the details, and Skeletonwitch replaces the dynamic shifts and riffs that set their particular heroes apart, making for a record that teases at great ideas, but just begs for a spin of Slaughter of the Soul instead. “This Evil Embrace” is a particular lowpoint, citing classic black metal rhythms and guitars without any of the genre’s venom, and while you might not need to burn a church and wear face paint to accurately deploy black metal sounds, developing new, dramatic ways to render them are a prerequisite.

The urgent churn of “I am of Death (Hell Has Arrived)” is a standout track on the otherwise lackluster offering, sticking closely to the melodic death metal that Skeletonwitch does best, and hinting at the band’s potential were they to commit to this specific style and apply more organic production. That said, within Serpents Unleashed lies a lesson for metal bands seeking a path in a genre that is completely saturated with new artists: Either say something new while covering the tracks leading to your influences a bit better, or ape those influences so authentically that it becomes an homage to a style, instead of a one-for-one ripoff.

Essential Tracks: “Serpents Unleashed”, “I Am of Death (Hell Has Arrived)”, and “Burned From Bone”