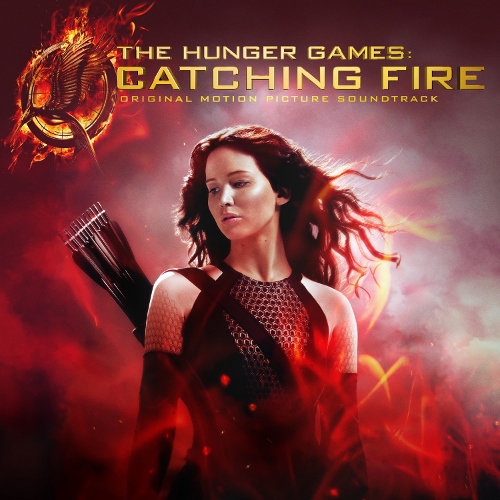 The soundtrack for The Hunger Games featured the subtitle Songs From District 12 and Beyond. This was a nice reference to the film itself, but it also evoked the folky, rabble-rousing bands like Arcade Fire, The Decemberists, The Low Anthem, and others that were included within. This time around, however, there’s no subtitle for the soundtrack; the film’s own Catching Fire title takes precedence, and the songs are made to match.

The film’s protagonist, Katniss Everdeen, is now famous and victorious, so this time around, bold pop songs are better suited to fill the collection. References to the source material crop up commonly, but none are too overwrought to disrupt the songs.  The biggest star on display is Christina Aguilera, whose stomping, strong anthem “We Remain”, powerfully demands “burn me with fire, drown me with rain.” Ellie Goulding’s reference to being “the girl on fire” slides nicely into her dark, slinky, self-examining electro-jam, “Mirror”. Santigold’s “Shooting Arrows At The Sky” has an obvious nod to Katniss in its title, but the song itself slots in nicely amongst her collection of loud and ecstatic funky pop, regardless of its inspiration. The Weeknd still manages to sound overtly sexy when he’s singing about faces in the crowd at the victory party in “Devil May Cry”. Lorde’s cover of “Everybody Wants To Rule The World” completely does away with the melody of the Tears For Fears hit, turning it into a bleak, atmospheric, industrial romp, as though our protagonist is seeing the predatory inner desires of all those that surround her, the end result almost unrecognizable from the original.

Of course, romance is a large part of the story, and that’s taken care of here by Sia, whose “Elastic Heart” steals the show (with the help of The Weeknd and Diplo), as she sings passionately about remaining unbroken through a war-like love, over excellently cresting bass and skittering drums. Elsewhere, Phantogram delivers a typical tapestry of nocturnal tones in the ill-fated tale “Lights”.

The collection does feature a ragtag bunch of indie bands, but there are far more chart successes this time around. Coldplay kicks off the collection with the spirited “Atlas”, and Of Monsters and Men, Imagine Dragons and The Lumineers each use their uplifting, troubadour folk formulas to produce effective results. Even a strong character like Katniss has her moments of understated poignancy, and these are handled by The National’s “Lean” and its refrain of “dying is easy,” and Antony & the Johnsons’ spellbinding “Angel on Fire”.

All in all, this soundtrack is a solid collection of B-level material from a varied selection of artists. Young listeners picking it up because they’re fans of the franchise or one of the bigger artists could easily use this as an entryway into a new musical discovery. And, in the end, that’s as much as you can hope for from a soundtrack of all new work.

Essential Tracks: Sia – “Elastic Heart” (feat. The Weeknd and Diplo); Lorde – “Everybody Wants To Rule The World”; Antony & the Johnsons – “Angel On Fire”