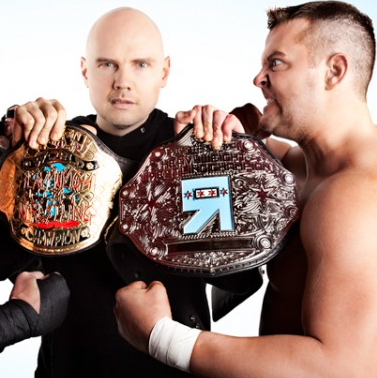 In recent years, Billy Corgan has spent almost as much time on stage as he has in a wrestling ring. Since 2011, The Smashing Pumpkins frontman indulged his passion for the true sweet science by leading the Chicago-based Resistance Pro Wrestling, running shows out of old barns and warehouses with indie grapplers like Colt Cabana, Harry Smith, ECW’s Rhino, and “Original Recipe” Matt Cage (even I can’t believe that last one’s real). Now, it seems as if Corgan’s stock as the “alt-wrestling Vince McMahon” is on the rise as rumors have surfaced that he’s purchased TNA Wrestling.

In a post from this past weekend, Alternative Nation’s Brett Buchanan wrote that a second-hand source within TNA “has verified that Smashing Pumpkins frontman Billy Corgan is far along in his talks to purchase the company.” Buchanan added that the source said “it is a ‘done deal,'” but “didn’t know what percentage Corgan will be purchasing or the specifics of the deal.” Rather than paying for the promotion solely out of his own pocket, Corgan’s apparently “made a connection to somebody very wealthy” who would help back the venture.

Adding to speculation, former WWE employer Lou D’Angeli, who has been a friend and confidant to Corgan, tweeted the other night, “Is @billy set on buying @IMPACTWRESTLING??? I know he is pretty serious in at least partial, if not, majority ownership. #TNA.”

Though, Corgan better hurry. He’s not the only one hoping to snag the reins of TNA, currently home to the likes of AJ Styles, Sting, Kurt Angle, and Jeff Hardy. According to various industry reports, other candidates include former WCW booker/head Eric Bischoff, TNA founder Jeff Jarrett, the WWE itself, and Viacom. The company, which is currently run by Dixie Carter as a subsidiary of her parents’ Panda Energy International, has been experiencing significant financial losses this year, going so far as to reduce their PPV schedule and remove several athletes from the roster.

As one life-long wrasslin’ fan, I’d be more than happy to see Corgan take over the company and help build it from the No. 2 league in the US to a more viable competitor to the long-running WWE. Case in point, we might get more gems like this recent commercial for Walter E. Smithe’s furniture chain.