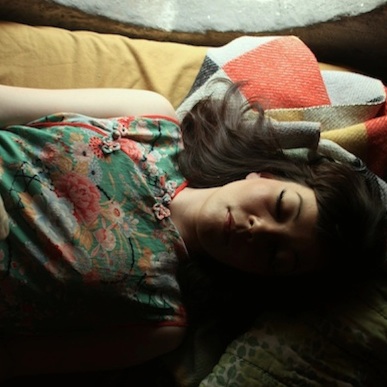 After years spent traveling, Sandra Sumie Nagano recently returned to Gothenburg, Sweden to begin her life in music. It’s a path that her older sister, Yukimi Nagano, a.k.a. the frontwoman for Little Dragon, had already taken up with much success. But whereas big sister and company fuse electrifying synth-pop and funky soul, Sandra — who now performs simply as Sumie — decided to explore the gentler, more intimate ambiances of dream-folk.

Sumie will release her self-titled debut album on December 3rd through Bella Union. The 10-track effort was produced by pianist and film composer Dustin O’Halloran (Marie Antoinette, Stranger Than Fiction) and recorded at the studio of German pianist Nils Frahm. Drawing inspiration from both her parents (Swedish mother, Japanese father), “the album melds both current Scandinavian and Japanese folk strains,” a press release reads. Added Sumie, “I have always thought that the cultural differences are very interesting. My way of doing things definitely carries the duality of both cultures.”

After sharing lead single “Show Talked Windows”, Sumie offers up another peek at the new record with “Speed Into”. A work of minimalist beauty, the track finds Sumie accompanied only by an acoustic guitar, her cavernous voice a beguiling and effective musical weapon all on its own. “Slowly, slowly, I speed into you,” she sings delicately, her words the baring of her soul. Listen in below.

And watch a trailer for Sumie the album: