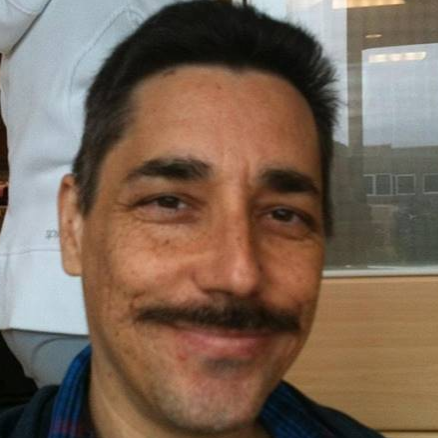 Scott Putesky, the founding guitarist of Marilyn Manson, has been diagnosed with stage-four colon cancer, according to WLRN.org. Putesky, who is better known by his stage name Daisy Berkowitz, is currently two months into a six-month chemo treatment plan. The 45-year-old was officially diagnosed on August 14th after experiencing nearly seven years of mysterious abdominal pain and weakness. The pain was often so intense, it led to several extended hospital stays.

To help with his growing medical bills, several of Putesky’s friends and neighbors in Miami have organized a benefit concert. “Beat 4 Life” goes down Saturday, November 16th at Churchill’s Pub, and will feature a live art auction, various booths, and performances from local bands and musicians, including Putesky’s friends in A New Way To Live Forever and frequent collaborator Amy Baxter. Head here for more information on the event.

After moving to Fort Lauderdale area in 1980, Putesky became involved in the burgeoning Goth-rock scene. In December 1989, he and a new transplant named Brian Warner, who’d go on to re-christen himself as the titular Manson, formed Marilyn Manson & The Spooky Kids. After building a reputation in the greater Miami area, the band signed to Trent Reznor’s Nothing Records in 1991, eventually garnering national attention with 1993’s Portrait of an American Family and subsequent tour.

Citing creative differences, Putesky left the group in May 1996 while recording the follow-up, Antichrist Superstar. Since then, he’s played with a number of groups and projects throughout the South Florida area, most notably SMP, the Manson off-shoot Jack Off Jill, Rednecks on Drugs, Stuck on Evil, and, as of last April, The Daisy Kids.

Below, check out a 2012 interview with Putesky, followed by a 1992 performance of the song “Speech”.