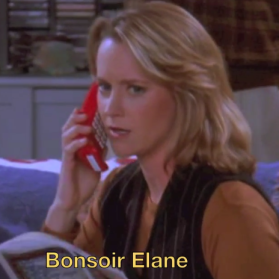 Among the countless hilarious Twitter accounts, which include comedian Rob Delaney, The Mountain Goats’ John Darnielle, and The Goddamn Batman, Seinfeld2000 is one that frequently falls under the radar. A satirical take on the more established SeinfeldToday, the account renders a bizarre parody Universe in which the Show About Nothing still airs on NBC, routinely delivering the laughs with cryptic, almost indecipherable tweets about Vitamin Water and suffocation. Now, in perhaps its greatest feat to date, the account has transcended mere tweets and created a Seinfeld music video using Arcade Fire’s “Here Comes The Night Time”. Not even our own amazingly awesome account can beat that.

The Reflektor stand-out serves as the soundtrack to a video documenting the “long and tragic engagement of Garge (George Constanza) and Suzette (Susan Ross).” Over the course of six glorious minutes, Seinfeld2000 documents every agonizing and awkward moment of George’s attempts to end the engagement he never wanted, utilizing the disco anthem to enhance the already hilarious interpretations of dialogue. While it sounds bizarre, the whole approach yields wild results, like George’s sad little revelation made funky with a chipper bassline at 2:50 or Jerry’s marble rye theft turned extra surreal with chunky piano at 3:40. It’s the kind of viewing that’ll make you say, “What’s the deal with this being so life-affirming?!” Watch below.

Now if you’ll excuse us, we’re going to DM the person behind arrypottah to do something similar with the Harry Potter series and Daft Punk’s “Get Lucky”.