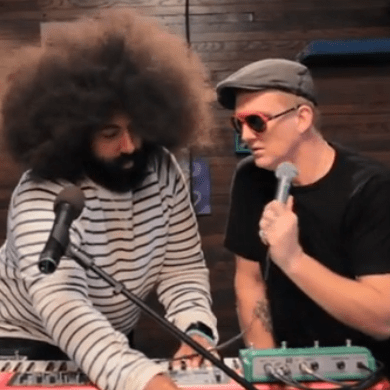 As the co-host of IFC’s Comedy Bang! Bang!, Reggie Watts has teamed up with a number of celebrities for totally impromptu and delightfully bizarre duets. There was the time he and Aziz Ansari serenaded each other about sandwiches, or the episode where he and Elizabeth Banks made the Hunger Games into a sensual ballad. Seriously, if you can eat it, watch it, or wear it, Watts can probably make a song about it.

For his latest collaboration, Watts has joined forces with Queens of the Stone Age frontman Josh Homme, a funny man in his own right, for a little ditty about taxidermy. (Which, based on the band’s latest video, Homme has a pronounced interest in.) The aptly-titled “Taxidermy Love” features talk of “raccoon love”, some fairly sound relationship advice (“Don’t ever get higher than love. Unless you have to”), and Watts and Homme engaging in a “caw off” over some sick cowbell. Quick, someone give these guys 100 hours of studio time, a book of Mad Libs, and an old Theremin ASAP. Catch the replay below.