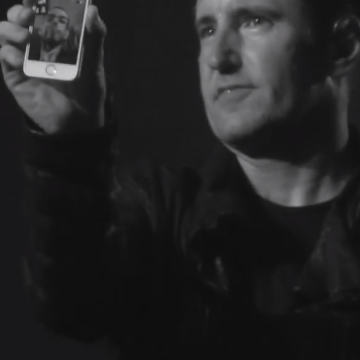 Photojournalist Andrew Youssef has spent the past seven years capturing the life and energy of live music, snapping photos of everyone from Black Sabbath and Dinosaur Jr. to Cold War Kids and Depeche Mode. He was diagnosed with stage four colon cancer in 2011, but his love for music remained unwavering; he continued to throw himself into the photo pit despite the illness’s ravaging effects, even documenting his battle in a regular OC Weekly column titled “Last Shot”.

But, after a hard-fought three-year battle, doctors recently told him that he only has weeks or a few months to live and that his days of concert-going are numbered.

One of the bands he’s sought comfort in time and time again is Nine Inch Nails, seeing them live nearly every chance he got and often referencing their music in many of his column posts. This past summer, he caught their set at the Outside Lands Festival in San Francisco, detailing the truly poignant experience:

My adrenaline levels soon would spike upon hearing the opening pulsating synthesizer notes of “Copy of A” from Nine Inch Nails. Bandleader Trent Reznor has mentioned that these Nine Inch Nails festival shows would be different from their fall arena tour which provided me with even more incentive to attend. I admittedly cheated and had watched their prior performance at Lollapalooza in order to study the light patterns and how they correlated with the songs in order to get the best photos as possible.

Since I was able to only shoot three songs, I made the most of my time by capturing twelve hundred images. Those songs went by in seconds as I ran back to meet up with a friend in order to take in the whole set. While I was tired from the activities of the day, I quickly forgot about the two heavy cameras I was carrying as well as anything related to my cancer as I was immersed in the moment. The crushing synthesizer bass line of “March Of The Pigs” transported me away as the eye popping visuals bombarded your senses.

I was holding back tears for “Something I Can Never Have”, as I so badly want to have my cancer cured. Even the bleak instrumental “Help Me I Am In Hell” resonated within me. The watershed moment came to me during “Head Like A Hole.” Reznor repeatedly chants “I’d rather die than give you control”. I was immediately overwhelmed with emotion and couldn’t hold back my tears as I’d rather die than give my cancer control.

As fate would have it, Reznor become aware of Youssef’s journey and his fandom. According to the OC Weekly, Reznor started following Youssef on Twitter in August, inviting him and his brother to NIN’s super-intimate show at the Troubadour. From there, the two had lunch every day together for a week as NIN rehearsed for September’s shows at the Sports Arena, talking Breaking Bad, the recovery and treatment process, and life in general. The two seemed to develop quite the bond, with Reznor making references to Youssef during several shows and interviews.

But more recently, finally facing a “dwindling energy supply,” Youssef heeded his doctor’s advice and cut his concert schedule down to two final NIN shows: November 8th in Los Angeles and November 16th in Las Vegas. He made it to the former show at the Staples Center but unfortunately found himself too ailing to make the latter.

Yet Andrew Youssef still got a front row seat to Saturday’s show at the Hard Rock Hotel & Casino. While he wasn’t backstage or in his beloved pit, Reznor FaceTime’d Youssef during the middle of the concert. Reznor held his phone up to the arena crowd–who cheered, “Andrew! Andrew!” in the background–before dedicating the song “In This Twilight” (fittingly the title of Youssef’s most devastating posts) to him. Whether you’ve followed Youssef’s story from day one or are just hearing about it now, it’s the kind of beautiful, gut-wrenching moment that not only proves the power of music but of a little human kindness. Catch the replay below.