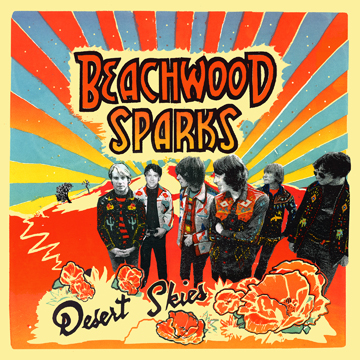 Beachwood Sparks are nostalgic at their core. Hazily sung psych pop and country rock melodies evoke the halcyon days of late ’60s and early ’70s Los Angeles rock, a “Laurel Canyon” sound codified by the Byrds, Buffalo Springfield, Jackson Browne, and others.  Considering this nostalgic thrust, perhaps it should come as no surprise that Beachwood Sparks would reach into their own past to present their latest work. Their new release, Desert Skies, is the long-lost first Beachwood Sparks album, recorded by the band’s original six-piece lineup in the late 1990s. As with all things shimmering and remembered, is nostalgia for a recollected (or imagined) time a compelling enough purpose to warrant repeated listening?

After erupting onto the scene in the early 2000s with two much-beloved albums, the self-titled Beachwood Sparks and its follow-up Once We Were Trees, the band went on a 10-year hiatus as principal members pursued solo careers. They reunited in 2012 and released the polished and high-minded The Tarnished Gold, which earned mixed reviews from fans old and new.

And now we are back at the beginning—well, before the beginning. Desert Skies is a document of an iconic band taking its first furtive steps. Even at this early date Chris Gunst, Dave Scher, Brent Rademaker, and Aaron Sperke express a preternatural gift for melody and harmony. Each track leads the listener by the hand as the band tries on elements that would eventually coalesce into the unified Beachwood Sparks sound. Album opener “Desert Skies” is a straightforward country-rocker with plaintive, sad-sack vocals and the keening guitar tone of the Flying Burrito Brothers, while “Watery Moonlight” is a driving, psychedelic rocker a with rollicking organ riff and a sweet-tasting melody reminiscent of The Zombies.

Later albums, especially The Tarnished Gold, show a more restrained version of the group with tight compositions and harmonies. On Desert Skies  the group is much looser. In “This is What it Feels Like”, the tight pop hook of the song’s first half unravels into a space-rock jam-out by the time the 4:41 run time concludes. Similarly, album stand-out “Sweet Julie Ann” opens with a delicate melody that wouldn’t sound out of place on Elliott Smith tracks recorded around the same time, but augmented with passages of wild psychedelic rock.

The burgeoning careers of Father John Misty and Edward Sharpe (and the Magnetic Zeros) provide compelling proof that the Laurel Canyon is not simply a magnet for nostalgia, but a verdant field ripe for exploration. Where the aforementioned artists take the sound as a starting point and build complicated mythologies and structurally innovative platforms, Beachwood Sparks seem more concerned with homage to a forgotten time. Desert Skies is a document of a band content with trying on various personae without pushing them into new and original areas. All the elements that would make the Beachwood Sparks a success in the following decade can be found here, but in halted jumps and starts. This is the kind of “empty piñata rock” where the surface is appealing and even fun, but further exploration reveals a hollow core.