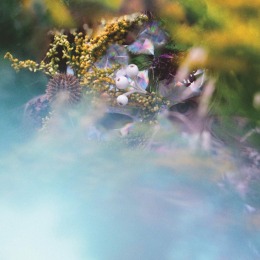 For a decade, Brian DeGraw stayed busy as the primary creative force behind left-field rockers Gang Gang Dance. Two years removed from that collective’s last full-length — 2011’s critically acclaimed Eye Contact — DeGraw has created the bEEdEEgEE alias to help cure his creative itch. While the moniker and the supporting cast may have changed, the underlying sound of DeGraw’s debut solo LP, SUM/ONE, is a familiar one.

Although reporting that this material was created isolated from Gang Gang Dance, the similarities are impossible to ignore. Not only does the album feature former collaborator Alexis Taylor (of Hot Chip) creating some sexual tension alongside CSS’s Lovefoxxx on the wonky romper “(F.U.T.D.) Time Of Waste”, Gang Gang Dance’s own Lizzi Bougatos adds ethereal vocals to the Paper Diamond vibes of “Like Rain Man”.

Further, like Eye Contact, SUM/ONE commences with a psychedelic spoken-word intro, here dubbed “Helium Anchor”. The voice recommends “closing our eyes, and to simply allow the mind, the body, and the the world to be exactly as they are from moment to moment,” thus negating the possibility to even make eye contact. The statement also serves as the theme for the work. While Gang Gang Dance’s output was an arduous amalgamation of pop sensibilities, worldbeat textures, and other melodic electronic wanderings, SUM/ONE arrives as a raw mold of DeGraw’s thoughts and sentiments.

Even the tracks that sound least like his band can find roots back to earlier DeGraw soundscapes. “Overlook” and “Quanturn Poet Riddim” are glitch-hop heavy, and most certainly wouldn’t have fit within the context of Gang Gang Dance albums. Yet, when listening to Eye Contact’s “∞∞”, one can already hear DeGraw playing with the glitch-meets-pop idea.

The risk is worth the reward on “Bricks”, when DeGraw abandons artistic restrictions. Shorter than most tracks on the release, the excellent song packs together trap hi-hat rolls, post-R&B croons, deep bass rolls, Middle Eastern melodies, and string arrangements for a cerebral endeavor through the bass minefield.

For those up to the challenge, SUM/ONE is a unifying electronic endeavor, astute in its own deconstruction for an indie crossover, and rife with enough low-end euphoria to get the most dedicated basshead bouncing.