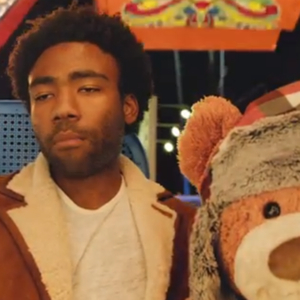 I’m calling bullshit on Childish Gambino’s new video for Because the Internet cut, “3005”. First off, there’s absolutely no way Donald Glover, star of Community and heartthrob to millions via Twitter, would ever wind up alone on a Ferris Wheel. Second, I’m pretty Seth MacFarlane’s Ted is Mark Wahlberg’s friend, so what’s he doing here? And third, the way Glover has that glum face just doesn’t add up to the freedom he was granted for wanting to back away from his NBC obligations. Regardless of my hesitations, the whole thing makes for a fitting video, though I’m still partial to his recent appearance alongside my boy Chance. Catch the teddy bear-friendly clip below and stream his new album here.