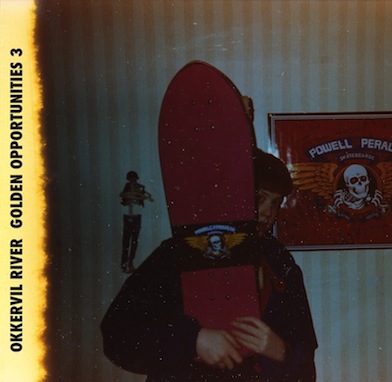 Okkervil River are just two months removed from their latest LP, The Silver Gymnasium, which ranks as the 26th best album from all of 2013. Now, they’re back with the third installment of their “Golden Opportunities” series. Coming six years after Vol. 1 and two years after Vol. 2, it again features an assortment of cover songs. This go-around, mastermind Will Sheff tries his hand at five songs dating back to the 1980s, including Rosanne Cash (“Seven Year Ache”), Don Henley (“The End of the Innocence”), and Cyndi Lauper (“Money Changes Everything”). Also included is the band’s cover of Wang Chung’s “Dance Hall Days”, which scored a mention in our Top 10 Covers of 2013.

In related news, Okkervil River has successfully funded a short film inspired by their song “Down Down the Deep River” via Kickstarter, and have shared a new trailer for it. Watch it here. They’ve also just announced a new leg of US tour dates spanning March and April. See the docket below.