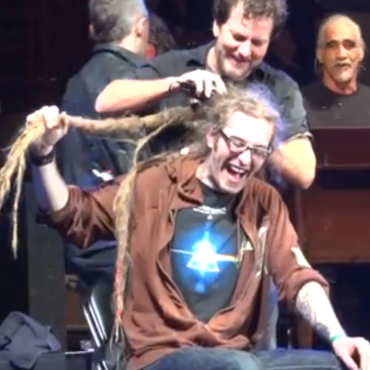 Now that we’re in the season of year-end accolades, this can probably be pegged as the most extreme fan request of 2013. As Jambase points out, a fan in attendance at Pearl Jam’s Saturday night show in Spokane offered to shave his dreadlocks if the band played Yield opener “Brain of J”. Eddie Vedder took the fan up on his offer, and after allowing him to head bang along onstage, Vedder grabbed a pair of clippers and went to work. Watch the video below.

The night prior Pearl Jam reunited Sleater-Kinney for their first on-stage appearance in eight years. How’d you spend your Thanksgiving weekend?