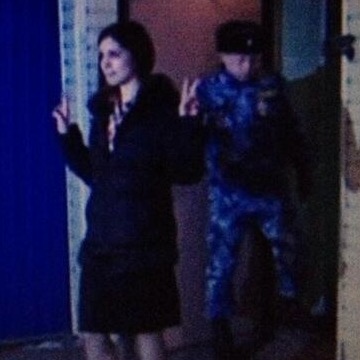 Pussy Riot members Maria Alyokhina and Nadezhda Tolokonnikova were both released from Russian prison on Monday, according to The Associated Press.

Almost immediately upon their release, Alyokhina and Tolokonnikova spoke to the media and remained steadfast in their criticism of the Russian government and President Vladimir Putin. Tolokonnikova shouted “Russia without Putin!”, according to the Twitter account Free Pussy Riot. In an interview with The New York Times, Alyokhina said Putin’s pardon (which allowed for their release three months early) was nothing more than a PR move.

“I think this is an attempt to improve the image of the current government, a little, before the Sochi Olympics—particularly for the Western Europeans,” Alyokhina said. “But I don’t consider this humane or merciful. This is a lie. We didn’t ask for any pardon. I would have sat here until the end of my sentence because I don’t need mercy from Putin.”

Alyokhina also spoke openly about the “endless humiliations” she experienced in prison, including undergoing forced gynecological examinations almost every day for three weeks. She said, “We will be creating very special, colorful and powerful programs to defend other innocent women in Russian prisons.”

Today’s events bring to a close a nearly two-year saga that began all the way back in early 2012, when Alyokhina, Tolokonnikova, and Yekaterina Samutsevich were arrested for performing the protest song “Punk Prayer: Mother of God Drive Putin Away” from within Moscow’s Christ the Saviour Cathedral. In August, the trio was found guilty of “hooliganism motivated by religious hatred or hostility” and sentenced to two years in prison.

Despite the Russian Prime Minister voicing his support for their freedom, only Samutsevich successfully appealed her sentence. Alyokhina went on a hunger strike in May which led her hospitalization. Days after writing an open letter documenting the human rights violations she endured in prison, Tolokonnikova disappeared for 21 days as part of a routine prison transfer. (Family is typically informed of a prisoner’s whereabouts 10 days after a transfer.) She turned up in a Siberian prison hospital in mid-November.

The women’s early release is due to the adoption of a new law in which prisoners “who haven’t committed violent crimes, first-time offenders, minors and women with small children” are granted amnesty from their imprisonment. Had this law come into play a year ago, Pussy Riot may never have seen prison.

Below, watch a news report featuring footage of the newly-freed women.