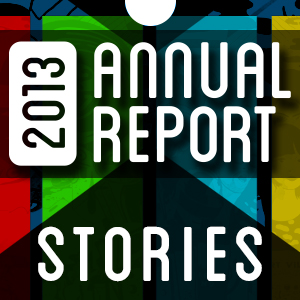 Today, we begin our 2013 Annual Report by looking back at the year in news and its 10 most defining stories. It took just eight days into the new year before history was made with the return of David Bowie. In the proceeding months, we witnessed countless other long-desired musical comebacks, as well as the emergence of a new crop of superstars, highlighted by a 16-year-old from New Zealand and a 26-year-old from Compton. A former Disney star reinvented herself with a foam finger, while others reinvented the album release process as a whole. Some of music’s biggest names waged war against streaming music services, two French robots were behind the biggest non-appearance in television history, and Death Grips continued to be Death Grips. The year wasn’t without its tragedy; MDMA became a household name for all the wrong reasons, and New York City lost its most courageous rocker.

If there was one thing to take away from 2013, it was this: today’s music spectrum isn’t all that different than it was 50 years ago. Consumption might be different, but underlying themes remain the same: the innovation, the controversy, the discovery, the tragedy, it’s all still there. Instead of The Clash battling their record label, it’s Thom Yorke spouting off against Spotify; instead of Mick Jagger drawing newspaper op-eds on sexual promiscuity, it’s Miley Cyrus inspiring Tumblr blogs. Music remains the defining force in our culture, whether for inspiring innovation, prompting self-realization, or bringing together 60,000 like-minded individuals together in one field.

All of us are guilty of taking such a reality for granted; but, the great thing about these year-end roundups is the perspective they provide. Now, join us as we highlight the year’s most important stories, the ones you’ll be recounting decades from now.