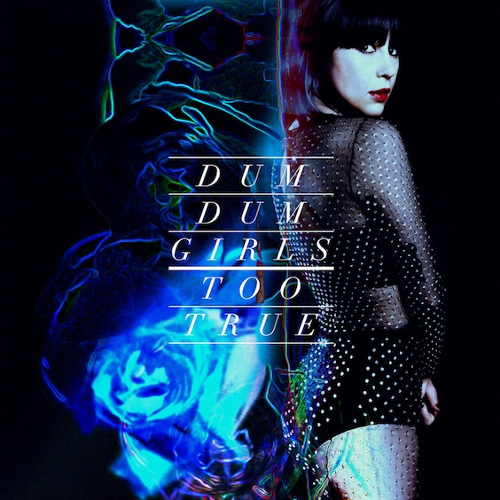 To paraphrase French author Paul Valery, all literature is written in common sense, except for that of Arthur Rimbaud. The decadent French poet — irreverent, morally loose — developed works that eventually became the cornerstone for surrealism and Dadaism. Rimbaud flourished in the 19th century, but his legacy lurks where abandon, curiosity, and fervor merge within art.

This intersection leads us directly to the smoky goth pop outfit Dum Dum Girls. The Los Angeles-bred quartet, led by principal songwriter Dee Dee Penny, has consistently produced swoon-and-gloom-tinged jams. But even when she’s singing salty farewell ballads, Penny’s voice warbles with sweetness, no matter how blackened the goodbye. Dum Dum Girls’ lovely debut, I Will Be, wooed with jittery love songs back in 2010, and the next year’s Only in Dreams found Penny’s then-solo project billowing into a full dream pop outfit.

The group’s third studio record, Too True, finds Penny sharpening her approach to songwriting and probing the concept of abandon into aesthetic. Specifically, she draws from two key periods that celebrated abandon within art — 19th century French poetry and the clang-and-clamor synth revolution that sprawled into dream pop, industrial sounds, and goth iconography in the 1980s — in order to craft a new vision for herself and her band. Dee Dee Penny wears her heart on one sleeve and her influences on the other, and Too True is translucent with both.

In an open letter via her label Sub Pop, Penny outlines how “time, intention, and fervor” drove her to develop Too True. Enlisting the production capabilities of seasoned songwriter Richard Gottehrer (who penned none other than “I Want Candy”) and The Raveonettes’ Sune Rose Wagner, Too True is rooted in the careful interplay of human and machine, synthesizer and delay pedal, vocals and echoes. The influence is apparent on the shimmying “Rimbaud Eyes”, invoking a muse through dark rhythms. Pop music has the potential for both blackness and bubblegum, and Penny aims to extract every one of its ominous capabilities.

Forever the romantic, Penny kicks off Too True with, “I belong to the cult of love.” The focal point of Penny’s affections have traditionally addressed a “he,” presumably husband and occasional collaborator Brandon Welchez of Crocodiles. On Too True, the gendered focus shifts, as Penny repeatedly both beckons and addresses a “she.” Given Penny’s poignant claim that her voice was destroyed — “my once infallible instrument to a pale spectre of its former self” — the invocation of that “she” may very well be a cathartic gesture, as Penny sheds a former self and moves forward into who she is becoming.

Penny recognizes, accepts, and moves beyond wistfulness to embracing the possibility of the open road at this point in her career. “There’s no particular place we are going, but we’re going,” she affirms on “Lost Boys and Girls Club”, plucking at the gauzy reverb of late ’80s Lush records. Still, there’s work to be done in order to give herself over to chance. On title track “Too True to Be Good”, Penny is still wrestling with her phantoms. “It’s hard to outrun the devil from behind,” she admits.

The goth pop spirit of Siouxsie Sioux fittingly shadows this somber record, but Penny simply doesn’t possess the same cataclysmic presence as The Banshees’ volatile singer. A certain caustic texture is missing here for Penny to take full command, perhaps shed for the taut studio arrangements. The punchy Too True sheds the woozy energy that made the achy bedroom jangles of debut I Will Be feel so immediate, although it’s difficult to place the two records side by side — Dum Dum Girls have evolved so far at this point, they might as well be a different band.

Still, a familiar shroud overcasts the ghoulish synths and fuzzy tambourines of “Evil Bloom”, and Penny manages to pull one hell of a line out of her studded leather jacket sleeve on “Lost Boys and Girls Club” (“Your eyes are black exes of hate and hexes”). The gossamer veils of ’80s dream pop, offering a sweet way to talk about sadness, are cast aside for more strobes, synthesizers, and Siouxsie. While the synth-happy instrumentation is laid on perhaps a little thick, the effort offers a handful of pop gems in return. “In the Wake of You” might be one of the catchiest songs about being completely devastated by someone, and the burning “Are You Okay” is instant hum material.

But Dum Dum Girls have a special penchant for concluding their records on poignant notes. During closing track “Trouble Is My Name”, Penny admits that despite her best efforts otherwise, she can never escape trouble completely. Old habits die hard, and Too True explores the implications of trying — and perhaps failing — to give yourself over to the uncertainty of the future.

Essential Tracks: “Cult of Love”, “Trouble Is My Name”, and “Lost Boys and Girls Club”