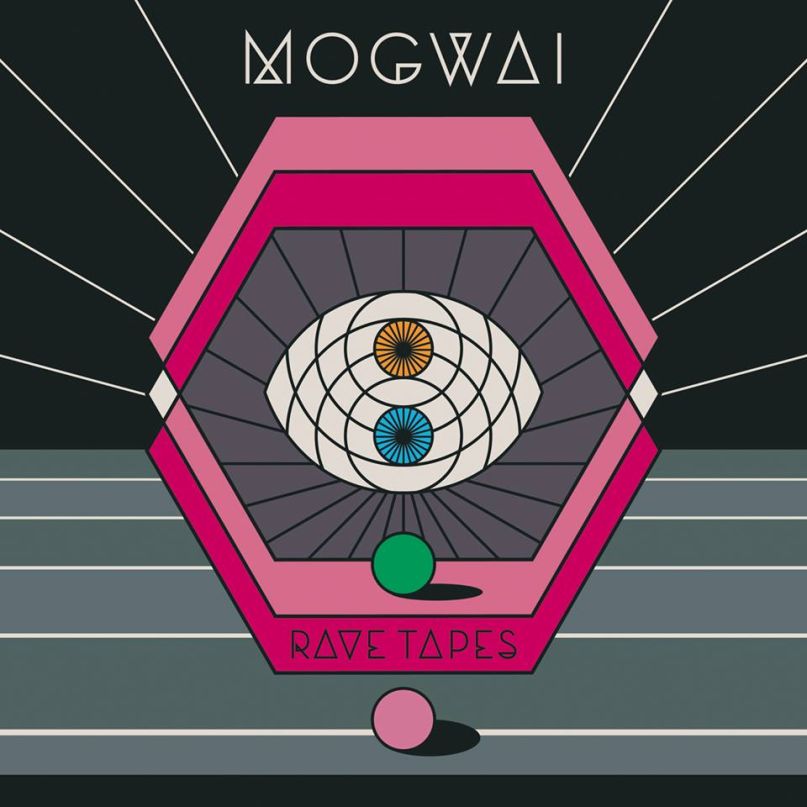 If Godspeed You! Black Emperor are the enigmatic and volatile wildcards of first-gen post-rock, Mogwai will likely stand as the genre’s last immobile pillar. Check back in with these Scots in ten years; odds are they’ll still be cranking through the same foggy riffs, still droning out melancholy vocals, still loping over the same modest crescendos. Mogwai are a mountain range. They are reliably pretty in exactly the way you expect. While the title of their eighth studio album might suggest a foray into the sounds of EDM, Rave Tapes sees Mogwai doing what they do best in the way they’ve always done it. For better or worse, this is archetypical Mogwai.

That’s not to say the band hasn’t exhibited some flexibility in their nearly two-decade career. Their last studio album, 2011’s Hardcore Will Never Die, But You Will, piped up with some of the balmiest major key tunes Mogwai’s crafted to date. Last year’s score to the French television series Les Revenants opted for a more delicate palette, letting cello, bells, and piano play among the earthy guitars and space alien synths. Give them a concept to wrap their music around and Mogwai will stretch to meet the challenge. Give them a blank slate, though, and they tend to revert to their standards.

There’s something to be said for a band that’s produced hours of music without ever really bungling a song. Mogwai’s discography doesn’t include many skippers; you can throw the whole thing in iTunes and you’ll have a day’s worth of pretty, uninterrupted cinematics. But it’s weird to hear a band learn so little from themselves. At this point I almost want them to fail just to prove that they’re still human and not an algorithm designed to reproduce Happy Songs for Happy People until the world ends.

At least Rave Tapes plumbs some of the darknesses of Mogwai’s best songs, those creepy spots that were mostly left behind on Hardcore Will Never Die. “Remurdered” slinks along with a cyber-noir riff before revving up into a Kraftwerk synth arpeggio and a chasm of fuzz bass. It’s easily the album’s most interesting song just for its willingness to court danger. “Deesh” also gets creepy, letting big drums keep time with a sickly analog pulse.

Other tracks don’t quite know where to position themselves in relation to the dark stuff. Halfway through the record, Mogwai inserts their first spoken-word sample in years into “Repelish”. It’s a reproduction of a 1981 broadcast by the evangelist Michael Mills, in which he discusses Satanic messages hidden on Led Zeppelin’s “Stairway to Heaven” played in reverse. Mogwai doesn’t lift the original audio, but lets a younger voice parrot Mills’s words without conviction. Are they mocking him? If so, why pick a target as easy as a Christian DJ convinced that the Devil is trying to convert young minds via rock music? Or is the audio here an attempt at a more subtle discussion of the fear that surrounds every new generation of music? Whatever the intent, the sample never meshes with its soundtrack, and never inspires thought deeper than “radio evangelists were probably mistaken about rock ‘n’ roll.”

That’s about where Rave Tapes‘ distinctiveness ends. The album finishes with a trio of songs that almost seem to directly reference other albums. “Blues Hour” layers Rock Action‘s whispered vocals over square melodies that don’t evolve, “No Medicine for Regret” is like a deboned Mr. Beast cut, and “The Lord Is Out of Control“, while boasting the record’s best title, is pretty much just a happier “Killing All the Flies” with its woody guitar and carbonated spook-vox. I mean, there’s got to be another setting on that vocoder, right?

As easy as these songs go down, there is comfort in knowing they exist. In three years, like clockwork, Mogwai will release another set, and they will be expansive, cinematic, and pleasant to the ear. While other bands strain to reinvent themselves, Mogwai seems happy enough playing Mogwai. Why blame them? It’s what they do best.

Essential Tracks: “Remurdered”, “The Lord Is Out of Control”