Peter Gabriel – And I’ll Scratch Yours 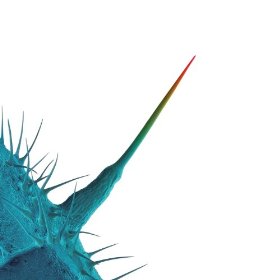 Lately, I’ve been hearing a cover of a cover of “Mad World” floating around YouTube’s advertisements. Echoing Gary Jules’ take on the Tears for Fears classic, this “Mad World” floats lighter than either ancestor: a smooth piano ballad, gently haunted, perfect for hijacking Feminism 101 to sell shampoo. While Jules might have flatly dethorned the song — there’s something to be said for spiking those lyrics with that beat — his cover at least fits its context, the melancholy reimagining of the ’80s in the 2001 film Donnie Darko. Minus a cinematic end, is there anything to be said for recasting upbeat songs with only strings and piano? Peter Gabriel pushed that question on Scratch My Back, the first disc of a covers-swap project he initiated years ago. On And I’ll Scratch Yours, most of the artists the pop mogul honored return the favor with their own takes on songs picked out from peak Gabriel. This record completes the project, but feels less like a whole listening experience and more of a thought experiment into tribute, ownership, and what it means to love a song enough to recontextualize it on your own terms.

Most artists here play themselves to a T, neatly fitting Gabriel’s structures into a parody-ready version of their aesthetic. In certain cases, the exercise feels like it must have been a humbling one, a chance for young artists influenced heavily by Gabriel’s innovations to stare down their heritage. Bon Iver’s “Come Talk to Me” stands out as especially lovely for this reason; the songwriter’s Grammy-winning record sapped its share of post-Genesis soft rock, for better or worse, and to hear Justin Vernon wrap his wispy Americana around one of its biggest roots feels natural, even joyful.

Likewise, “Not One of Us” as done by Stephin Merritt highlights just how indebted the Magnetic Fields are to Gabriel. Now that discussing conscious artistic influence is nearly as clichéd as bringing up the physical space where music was recorded (“You laid tape in a log cabin in New Hampshire? Good for you.”), actually tracing the DNA of a band long after you’ve come to love them helps place them in broader music history. Appearing here wasn’t just a chance for contemporary artists to pay tribute to one of their heroes, but an opportunity to fix themselves in his shadow. It’s been easy to see Merritt as a personality; And I’ll Scratch Yours gives him a place to ground himself as a musician. And, while Joseph Arthur might be a dead ringer for Gabriel in his vocal prime, his take on “Shock the Monkey” — slowed down, creeped out, barely even Gabriel — throws the radio favorite into a simmering underworld.

Other descendants flounder a little. While Régine Chassagne makes a perfect analogue for Kate Bush’s breathy French, “Games Without Frontiers” loses its quirk here, plodding along with all the heavy self-importance that Gabriel and Bush deliberately skirted. Arcade Fire rarely think small, especially when it comes to the doomed innocence of children. But “Games” was never a military march for good reason. Arcade Fire lose out on the irony that made the song tick, opting for a war machine of a cover that’s too literal to hold nuance. Later, fellow Canadians Feist and Timber Timbre make the ballad-est of ballads even limper, coasting “Don’t Give Up” at an easy folk pace, pleasant but unconvincing.

Conversely, Gabriel’s peers and predecessors inject a fresh hell into his music, teasing out dark corners never conceived in his original art-pop strokes. Brian Eno’s dystopian “Mother of Violence” strikes a key that’s spooky even for him, shirking melody in favor of brutal post-punk machinery. Randy Newman does Randy Newman, but to hear him mouth Gabriel’s lyrics to “Big Time” soon becomes straight weird. This is the guy best known to my generation as the Toy Story maestro, and he’s singing about his ballooning ass. Sometimes it’s freeing to belt lyrics that don’t belong to you.

And then there’s a moment, the record’s climax, that adopts meaning beyond what any of its creators could have intended. This version of “Solsbury Hill” was one of the last pieces of music that Lou Reed ever recorded. Now wafting from beyond the grave, his voice takes an uncanny lilt. So does the entire song. The rom-com staple transforms under Reed’s combustive guitar, blooming into something raw, and hot, and heartbreaking. Reed scribbles far outside Gabriel’s clean pop lines, and when at the last chorus he finally sings, “Keep my things, I’ve come to take you home,” the track becomes the art rock legend’s perfect final transmission. It’s unabashedly Reed, maybe even a Reed who knew he didn’t have long left to go. Put Lulu aside; let’s remember him like this.

And I’ll Scratch Yours helps to understand musical materialism as a concept that’s still new to the world. The idea of somebody “owning” a song emerges not from tradition but from the record industry, after all. The album is lucky enough to capture that rare moment when the second take on a song becomes more real than the first. For his final move, Reed gives a half-baked covers album a firm reason to exist.