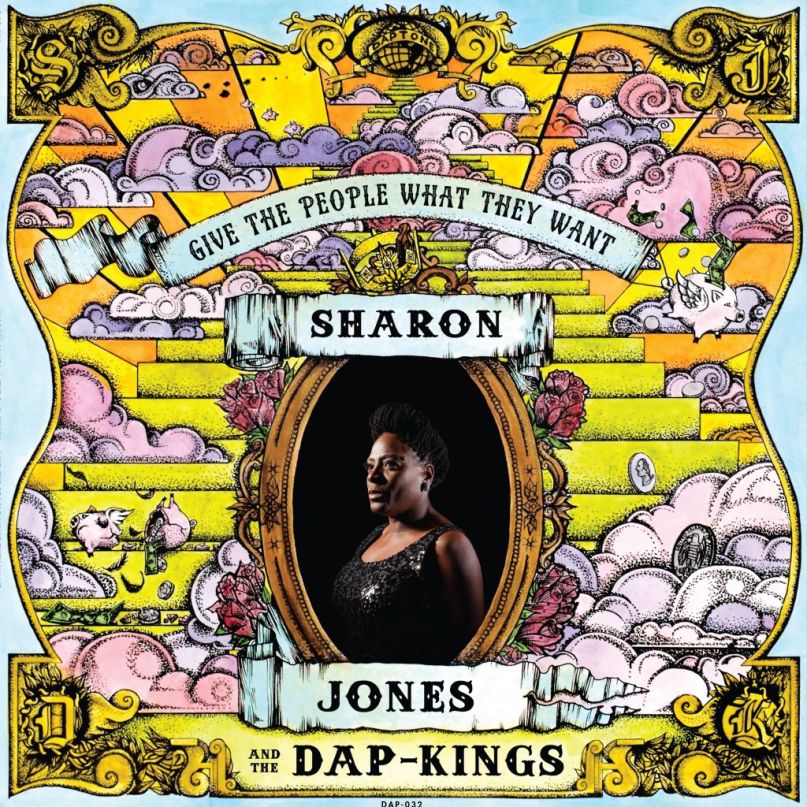 I’ll never forget the night I saw Sharon Jones and the Dap-Kings live. It was the summer of 2010 — the band had just released I Learned the Hard Way — and Jones had a nasty sinus infection. Before they started playing, she approached the mic and apologized to the audience: “I’m not myself tonight, but we’re gonna push on.” Most vocal performers would probably have canceled the show, but not Jones. Instead, she sang her ass off for an hour and a half, cold be damned. That night, I learned Sharon Jones was as strong as the woman she portrays in her songs. She gets things done, she moves on. Triumphantly.

You can’t underestimate the strength of will. Sharon Jones is proof. Last year, she was stricken with a far more devastating affliction when she was diagnosed with stage II pancreatic cancer. It threatened both her life and livelihood, as she underwent multiple surgeries and chemotherapy treatments to remove the tumor. She couldn’t sing. Her already-finished fifth studio album with the Dap-Kings, Give the People What They Want, sat on a shelf.

“For me, music is my joy. It’s my happiness,” she said in an interview with Spin. “As long as this medicine, this chemo is in my body, I didn’t have my love, my joy.”

Remarkably, and to the surprise of her doctors, Jones recovered swiftly, and started singing again in October. With some lingering treatments and checkups in her future, Jones is able to say she won her battle with cancer. Her tour was rebooked, the album readied for launch, and the rejuvenated Dap-Kings set for the stage. Their recent appearance on Fallon speaks for itself.

Written and recorded prior to her diagnosis, Give the People What They Want has nothing to do with Jones’ battle or any of the adversity she suffered over the past year. But, its songs are confident and spirited, the songs of someone who could grapple with cancer and emerge victorious. On opener “Retreat!”, she’s downright vicious about it: “Play with me and you play with fire/ I can make you pay/ I burn you up/ This is my desire.”

This first track makes it immediately apparent that the Dap-Kings are still one of the best backing bands in the business. Bosco Mann’s production treats the horns, backing vocals, and acoustic rock instruments like a small orchestra, fiddling with every tone so that each stands out behind Jones’ powerful voice. On upbeat tracks like “Now I See” and “Stranger to My Happiness”, each instrument can be picked out of the stereo field, concentrated on, and the pure musicianship at work absorbed.

Whereas I Learned the Hard Way suffered from a lack of variation in songwriting, Give the People What They Want transverses the dictionary of soul and pulls out a few different entries, making it a much more engaging record. “Get Up and Get Out” recalls Sam Cooke with a loose, jazzy backbeat and interweaving brass; “Making Up and Breaking Up” touts the album’s catchiest chorus and would’ve been a hit had Diana Ross and the Supremes sang it 50 years ago.

A couple of tracks (“We Get Along”, “Long Time, Wrong Time”) fail to grab the ear quite like the others, but, overall, this is a tight 30-minute offering and the best Dap-Kings album since 2007’s 100 Days, 100 Nights. If Give the People What They Want will be remembered more for Sharon Jones’ battle with cancer, then let its circumstances emphasize the many triumphs expressed within the songs.

Essential Tracks: “Retreat!”, “Now I See”, and “Making Up and Breaking Up”