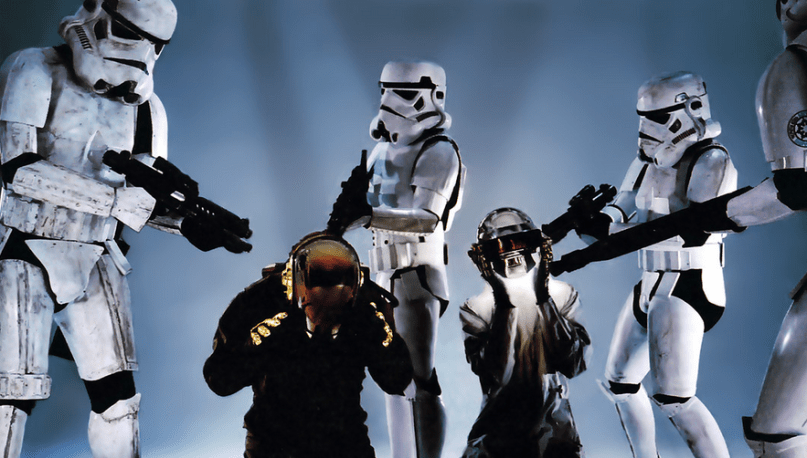 When Daft Punk hit the stage at the Grammys tomorrow night, they’ll be doing so without their trademark helmets. Rather, according to The Hollywood Reporter, the French electro duo will deliver their first live performance in support of Random Access Memories while wearing Star Wars stormtrooper helmets. No, really.

The Hollywood Reporter notes that the masks “look like they could be from the The Empire Strikes Back era and appear to be authentic.” Star Wars’ official Twitter account has since confirmed the report, writing, “We’re up all night to get Rebels. #DaftPunk to don some new helmets at @TheGRAMMYs.”

Update: Check out a photo of Daft Punk wearing the stormtrooper helmets during soundcheck (via Instagram).

Believe it or not, this won’t be the first time the galaxies of Daft Punk and Star Wars have collided. In 2010, the Robots were spliced into Star Wars’ cantina scene for an Adidas commercial (watch below). They’ve also expressed their excited for the next installment of the film spearheaded by J.J. Abrams. “We’ve always been big fans of his work. I happened to have met J.J. a few years back, and he’s a really cool guy. He seems to be the perfect candidate to keep the Force alive,” Thomas Bangalter told Radio.com. Might this Grammys performance be some nifty product placement to advertise the new film?

As previously reported, Daft Punk will be joined by Pharrell Williams, Nile Rodgers, and Stevie Wonder for their Grammys perform. According to The Hollywood Reporter, they’ll perform a medley of songs, including Daft Punk’s “Get Lucky” and “Lose Yourself to Dance”, Wonder’s “I Wish”, and Chic’s “Le Freak”.