Dusting ‘Em Off: Death – …For the Whole World to See 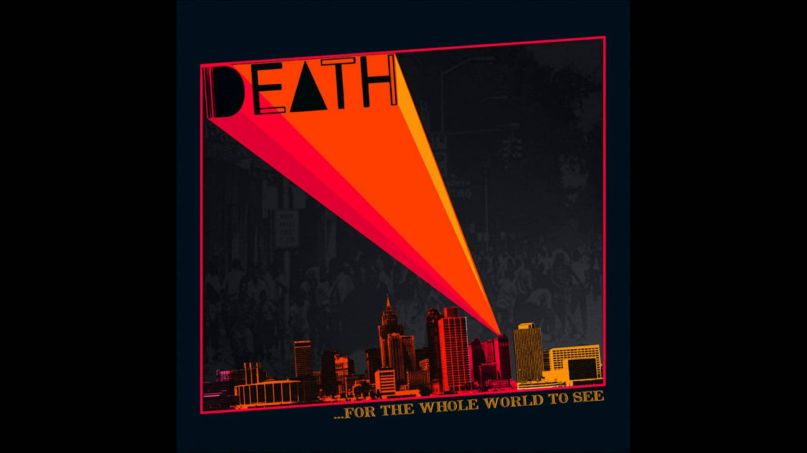 For this edition of Dusting ‘Em Off, staff writer Sam Willett revisits …For the Whole World to See, Death’s resurrected studio album, which turns 40 years old from its original recording this year. In honor, Sam analyzes the band’s significance to the punk genre and influence beyond Michigan proto-punks like Iggy Pop and MC5, as well as the spiritual philosophy locked into the grooves of its physical form.

The public perception of the history of punk was recently altered thanks to one of the most shocking music tales ever. A Band Called Death, as the 2013 documentary is simply titled, spreads the word of a miracle, shedding light on a lost music project nearly 40 years later. The film follows Death from its conception to premature end, due in part to issues with that band name. The band’s three brothers thrived off influences like Alice Cooper and The Who to project an energy never heard on the radio waves, but were halted once record company execs refused to print “d-e-a-t-h” on a record, as noted by Groovesville Production’s Don Davis in the film. When self-promotion failed, they stored the tapes in an attic, only to be rediscovered and hyped by a few punk rock fanatics years later. There’s been plenty of coverage surrounding this story, but much of it overshadowed the actual music that made it possible. Death’s …For the Whole World to See is not only a living document of what punk was before the likes of The Sex Pistols and The Ramones, but it’s also about how a band of three brothers proves relevant today, even after the genre has journeyed through thousands of transformations.

What allowed Death to survive, even before their swell of international appreciation, was their focus on family. A Band Called Death focuses on the Hackney family’s love for music and how it echoed through every room of their home in Detroit, MI. Walking through the door, the eye first focuses on pictures of the boys rocking. Peering over to the clock, a note designating band practice between 3:00 p.m. and 6:00 p.m. is posted for everyone to see. Even though their mother worked a demanding job, she didn’t mind hearing the chaos from the upstairs bedroom, their “rock ‘n’ roll haven.” The transformed bedroom was soaked in magazine clippings of their favorite bands, fliers for their shows, and, most importantly, family photos to fuel their gnarly drive.

In the 1970s, there wasn’t an audience for this sort of music, at least not in this neighborhood. Neighbors and friends would call the police and pound on their doors to halt the deafening performances, but the Hackney brothers would keep driving forward. The Detroit community expected the black musicians to play Motown or R&B music, as opposed to their boisterous earache. “Keep on knockin’, keep on knockin’ on the door!” cries Bobby Hackney to kick off …For the Whole World to See, proclaiming their revolution not only against their crabby neighbors but also the norms of rock ‘n’ roll itself. Guitar solos soar as the trio crunches into its nasty three-chord progression, the visceral excitement that opens the album giving Raw Power kick-starter “Search & Destroy” a run for its money.

Upon its release in 2009, many critics tagged the band’s resurrected tapes as carbon copies of MC5’s Kick Out the Jams and Iggy Pop’s Raw Power, two essential Detroit proto-punk innovators, but that isn’t entirely accurate. “You’re a Prisoner” and “Politicians in My Eyes” obviously burn with political zeal, but fire with more optimism than its counterparts. They reveal the trickery practiced by political slobs (“reaching out shaking hands, making friends and other plans”) and try to spark revolt. Even as it shoves listeners far from their comfort zone, there’s some inner strength here as well: “you try so hard because you wanna be free, but your mind takes you further than you see.” Iggy Pop works this type of material with mockery, displaying his disgust through accepting “Penetration” or dangerously strutting like “a street-walking cheetah with a heart full of napalm.” The Hackney brothers assume the same blistering anger, but there’s genuine hope for change in lines like “Politicians, tell me why can’t you hear the people cry?”

These Michigan proto-punk legends were all about getting down and going crazy, too, able to embrace the nastiness of “Raw Power” and the energy behind “Kick Out the Jams”. But Iggy and Rob Tyner were avant-garde performers on stage, transformed into crazed maniacs. While this holds an undeniable appeal for some, it caught the wider audience off guard. Death’s “Rock-N-Roll Victim” best represents the band’s scope of punk rock, a wild transformation perhaps easier to embrace than Iggy’s wild dog athletics. “Jump on the seat and start to move your ass” sounds like it could’ve been torn out of a rockabilly song, but it fits the direction of the then-developing genre and gets people moving. This sleeker approach embraces zaniness without going overboard, which stems from their previous background in funk and R&B.

Even though their first project, RockFire Funk Express, didn’t take off, it taught them how to confidently, clearly display their talents. Bobby Hackney’s tenor intimidates with yelps of “Death!” but also pronounces them with a hint of measured elegance. The cries locked into “Politicians in My Eyes” and “Where Do We Go From Here???” are clear and full of soul, especially his loaded falsetto. David’s wailing guitar solo in “Let the World Turn” works toward a collective dominance rather than showing off a guitar god status (though there are flashes). Dannis’s drum solo on “Let the World Turn” lays on the snare, punctuated only by sporadic hits from the surrounding toms, revealing the potential power of silence in the middle of a punk song, which hits a lot harder than expected.

True, Death never produced nightmares the way The Stooges did with “L.A. Blues”, but they succeed in twisting the imagination into a fucked-up dream when they do trip into hallucinogenic territory. Psychedelia was a leading genre during the ’70s, obviously, but it wasn’t typically embraced by punks. Death, on the other hand, incorporated its spacey landscapes and surreal lyricism right before the halfway mark of …For the Whole World to See. “Let the World Turn” leads to two heated punk songs that give no evidence of letting up, but the track’s whammy-infused chords reveal a fresh rawness first in order to set the table. Bobby’s lyrics unfold like a fortune-teller, as he urges the listener, “If your dream is shattered, pick up the glass” and not to give up on discovering peace and happiness. The track unleashes their relentless punk drive as it approaches its climax, but seamlessly drifts far away as they reenter their trippy alter ego. A six-minute tune from a punk band may sound like a challenging endeavor, but the Hackney brothers knew what it takes to keep listeners holding on. The track has an explorative trait that the vast majority of punk bands hadn’t touched, one of the most awe-provoking early punk moments.

“Freakin Out” touches on similar psychedelic influences, as Bobby believes he’s “up on the moon.” This stargazing fits, as David looked to the sky to seek a spiritual vision for the band. After the passing of their father, David became obsessed with giving the concept of death a positive spin, identifying it as “the ultimate trip” in the documentary. Soon, this questioning would be visualized while outside their mother’s home in 1974, as he saw a series of three clouds in a triangle formation with an outlier to the bottom-right, the image later becoming the band’s logo. While the triangle represents the essential elements of life (the spiritual, mental, and physical), the outlier stands as a spirit that controls them. David found this philosophy to be so inspirational that he emphasized it as the passion and purpose behind the band of brothers, suggesting the band name Death to capture the vision. Even though his brothers found this name and theory to be a bit risky, they supported him.

David would carry his passion for Death in his heart until his tragic fall to lung cancer in 2000, even through his brothers had moved on to other projects. After all of the rejection and failure they experienced, they moved on from the philosophy easily. One of David’s final requests included holding on to the recorded Death material, stating, as his brothers would recall, that “people will come looking for these someday, but I won’t be around.”

To their surprise, he was right. By 2009, the Death recordings were in high demand from record collectors and bloggers. The band’s only physical release, a 7″ for “Politicians in My Eyes”/”Keep on Knocking”, was selling for hundreds of dollars on eBay, and digital downloads of the track became quickly and widely hyped. Bobby Hackney Jr. was so inspired by his father’s music that he formed the band Rough Francis to cover and share it. Once word traveled to Drag City Records in Chicago, they requested the dusty Death tapes, gave the music an official release, and scheduled the reunited Death’s first tour ever. Dannis and Bobby were left flabbergasted that such an in-demand release was sitting in an attic for over 10 years. David is probably still laughing, wherever he is now.

…For the Whole World to See is a miracle made possible by a band of three brothers. Without their family bond and the spirituality packed behind every thrash of punk energy, these tapes would have never seen the light of day. It’s fascinating to to think of how the album would have impacted the 1970s and the beginnings of punk, but we’ll never know exactly how that would’ve played out. Instead, A Band Called Death displays the way in which music lives beyond the limits of a moment. Fittingly, …For the Whole World to See continues to live long after its conception and continues to impact the genre. In the end, “time is all we’re made of,” and “the world will keep spinning,” so “let it spin.”