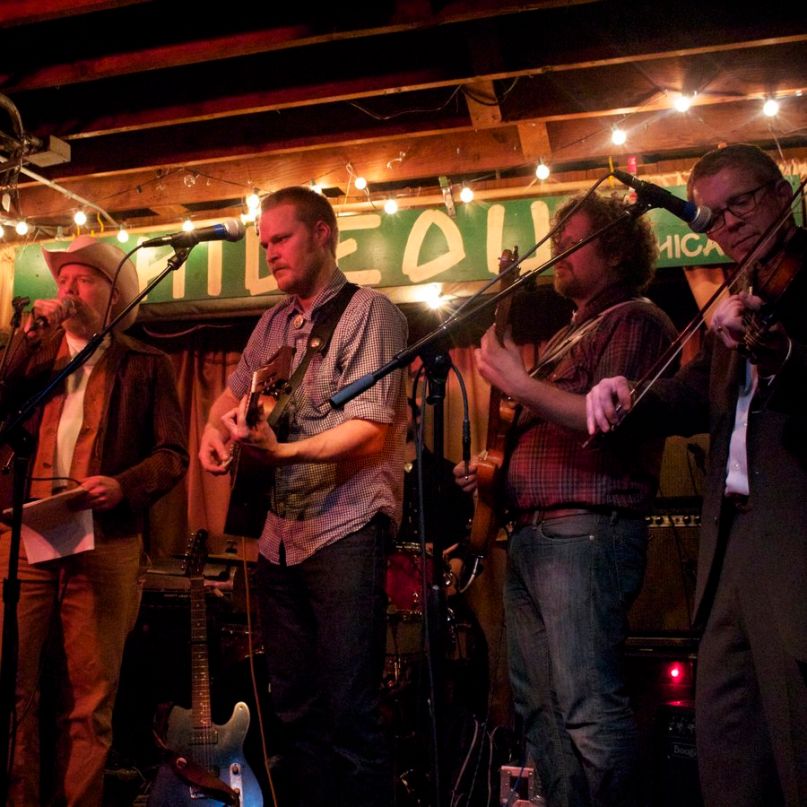 I’m not a fan of funerals. I guess no one is, really, although I’d argue that lots of people find them cathartic. But I always feel like everyone’s doing their best to not be depressed, to be celebrating the deceased’s life rather than mourning their death. And that’s a tall order, at least for me. If someone close to me passes away, I need a while to be pissed off and weird about it. I need a while to feel lost. I need a while to just be sad.

At the start of their Hideout show this past weekend, the musicians of Songs: Molina – A Memorial Electric Co. definitely seemed a little sad. They had every right to be, as their frontman and songwriter, Jason Molina, died of alcohol-related organ failure last March. But, because they confronted this sadness head-on, because they played their band leader’s music so soon after his death, because they weren’t afraid of sharing the stage with a ghost, they were able to break through their grieving, if only for a few hours.

Of course, there’s no replacing Molina’s heartbreaking caterwaul, and, thank God, no one tried. Instead, nearly every one of his old colleagues took the mic on at least one song, with several guest musicians lending their pipes as well. Some, such as Bottomless Pit’s Tim Midyett and Hiss Golden Messenger’s M.C. Taylor, had a more exuberant twang than Molina, making later-period songs like “The Dark Don’t Hide It” and “What Comes After the Blues” more uplifting than they are on record. One of the most triumphant moments came from Midyett, when he paused to wipe a tear from his eye during the bridge of “Dark”, then gathered himself in time to howl out the chorus. Joseph McConnell of Elephant Micah, on the other hand, took the lupine imagery of “Bowery” to even eerier depths with his mournful tenor.

The most distinctive throat of the night belonged to Lawrence Peters, whose darkened hickory voice provides the guest vocal on Magnolia Electric Co.‘s (the album, not the band) “The Old Black Hen”. Aside from “Hen”, his mellow takes on “Just Be Simple” and “Northstar Blues” were charismatically rootsy, and anyone who had issues with his lower key-of-G version of “Farewell Transmission” missed the point. The show wasn’t about perfectly replicating Molina’s studio recordings. It was about his friends sending him off in style and working through some of their own feelings of loss. The imperfections — from Peters needing glasses to decipher a lyrics sheet (“Puttin’ on my readers,” he quipped) to the musicians bumping into each other as they entered and exited The Hideout’s tiny stage — all fit in with the emotional authenticity of the evening.

Although the show was split into two sets — one from Magnolia Electric Co. and, for the Chicago stop only, one from the grungier Songs: Ohia — the division was a moot point. This was a single band of brothers who cross-pollinated each other’s lineups, just like they did when Molina was alive. Songs: Ohia was only three songs into their set when wild-haired Magnolia guitarist Jason Groth came out to sing the nihilistic dirge “Almost Was Good Enough”. “It’s great to be here, playing these songs,” he told the crowd, setting a tone of brief, yet resonant stage banter for the night. Shortly afterward, Ohia’s Dan Sullivan shared Molina’s sense of humor with the audience:

“So many dick jokes,” he said. “But those songs were so fucking dark. I didn’t realize until later that they were two sides of the same coin, probably because I was laughing so hard.”

For the finale, Songs: Molina crammed as many members onto the stage as possible for a triptych of cuts from Magnolia Electric Co. Although the night ended with the somber “Hold On Magnolia”, I prefer to remember things going out on a more joyous moment from the thunderous “John Henry Split My Heart”. Violinist/guitarist Dan Macadam — unflinchingly polite in a baggy gray suit — played his axe so hard during the opening three notes that his glasses fell off his head. The band (nine people deep at this point) laughed and continued to wail as he put them back over his eyes. This was no longer a funeral. It was a rock concert. And what could be more cathartic?

Songs: Ohia setlist:
“Are We Getting Any Closer”
“Constant Change”
“Almost Was Good Enough”
“Just Be Simple”
“The Old Black Hen”
“The Big Game Is Every Night”
“The Black Crow”