Krill – Steve Hears Pile in Malden and Bursts Into Tears 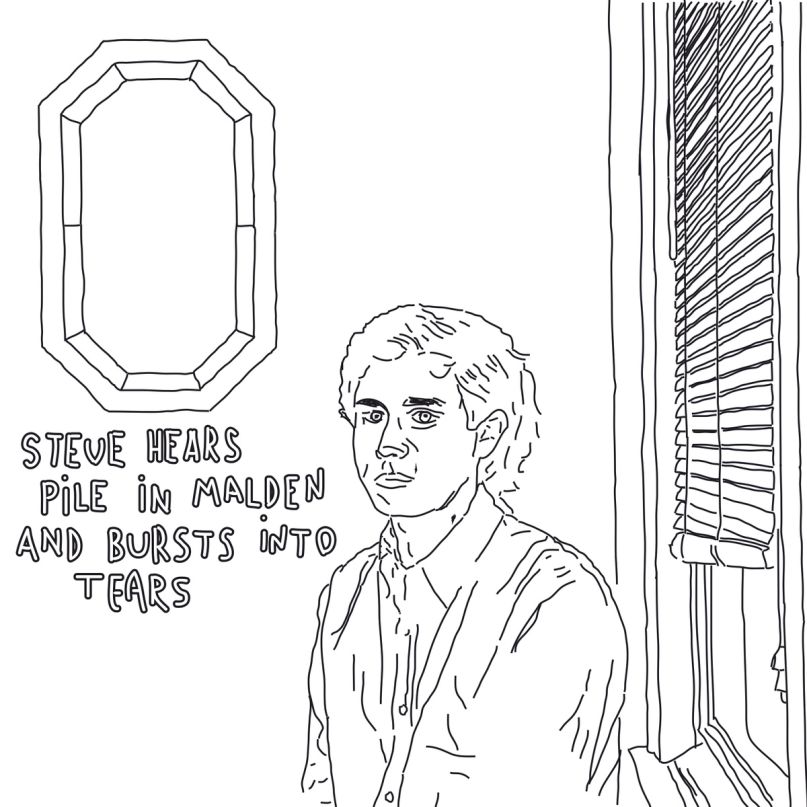 “Why me? The great complaint of the constipated. Why doesn’t the world work for me? The lonely sitting man in the porcelain machine. What did I do wrong yesterday? What unassailable bank in my psyche needs shit? How can I begin anything new with all of yesterday in me?” — Leonard Cohen, Beautiful Losers

Jonah Furman isn’t the first to write about feces as a metaphor for the absurd status of being human, but to be fair, I don’t think Leonard Cohen ever wrote songs about shit. On “Turd”, the centerpiece of Krill’s new short-form release, Furman winds himself into as deep a lyrical puzzle as Cohen often did, only he starts by imagining himself as a literal piece of poop: “I had a vision of myself/ A turd spinning in flushing water/ Not going down.” He’s the digested matter clogging someone’s toilet; he’s the clot of neuroses clogging his own life. He sees the plunge into the pipes as a kind of suicide — not the ideal destination, but a decisive one. Then he wants to be reincarnated as a peanut so that at least he could be eaten, at least he could feed someone else. Maybe I’m stuck on the anal phase, but I’m picking up on some sexual undercurrents here, too. He wants someone to swallow him; he wants to take “a peek at your insides, all red and brown.”

Despite the title and the buzz, Steve Hears Pile in Malden and Bursts Into Tears isn’t really a concept EP, failed or otherwise, about Krill’s Massachusetts peers. It does turn the title of Pile’s “Steve’s Mouth” into a set of characters, Steve and Mouth, who project Furman’s fears and frustrations onto a charming dork rock stage. Steve Hears isn’t a failed concept EP about Pile — it’s an EP about failure that happens to have picked Pile as its nucleus.

The opening title track takes a banal email exchange and twists it into a fable of friendly rejection and professional envy. Furman, playing Steve, hears Pile’s latest album and is floored. All he wants is to make something that good. He emails the band’s frontman, Rick, and asks to play with them sometime. Rick says they’re all busy. Steve replies with a nonchalant line that Furman howls from the pit of his diaphragm: “That’s cool, man/ Busy is a good problem to have.” Hearing the social tics that so many twenty-whatevers use as armor exploding across such a tight, fiery little song works as its own catharsis. It’s common enough to hear a songwriter revere an ancestor in lyrics, but a direct peer? I guess a lot of people feel that everyone else is doing better than they are.

Outside of the title track and “Turd”, Steve Hears gets a little wooden. Furman likes funneling his anxiety into ridiculous metaphors or boring encounters, and that’s when his lyrics work best. He’s not quite as good at being direct, as on “Sweet Death”, “Fresh Pond”, and “Unbounded Nameless Future”. But while Krill’s no Pile, Furman’s the kind of songwriter I’m willing to follow all the way through the digestive tract and into the sewer.

Essential Tracks: “Steve Hears Pile in Malden and Bursts Into Tears” and “Turd”