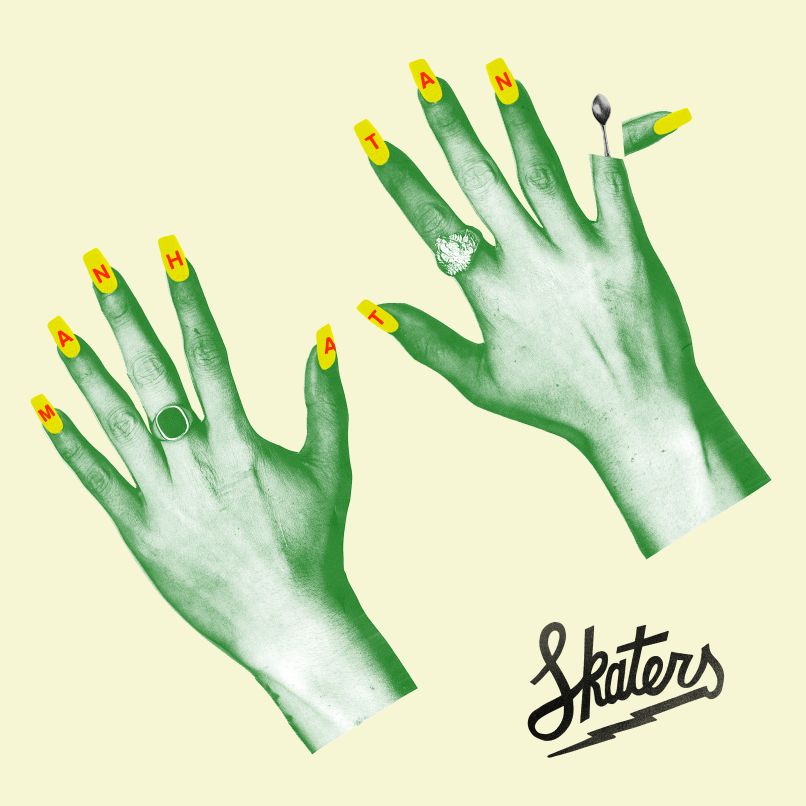 Before any music: a field recording of a distant, rumbling subway car set against a canned Casio-SK1 beat. This is the first of many conversation snippets and other “day-in-the-life” fragments that open songs on SKATERS’ debut album, Manhattan. These traces of “city as text” are a not so subtle indicator that SKATERS are writing of, about, and within New York City. Their album becomes something like a living document (or shifting palimpsest) where the city fuels the art and vice versa. By tying together sounds, stories, and influences from their lives, SKATERS assembled a portrait of the young man’s rock ‘n’ roll lifestyle in New York City.

The band’s attempt to enter the royal lineage of New York rockers seems almost crassly over-orchestrated. Signed by Warner Bros. Records (not exactly an honored indie label, but whatever) during the months before the release of Manhattan, a string of professional-quality viral videos and collaborations got the buzz nicely bubbling. On album, they waste no time identifying their forebearers and setting out to consume and (hopefully) surpass them. Album opener “One of Us”, with its pounding drums, breathless, fierce guitar line, and curling snarl of vocals, feels like a shot across the listing bow of The Strokes. Not content with simple homage, SKATERS take the successful elements of bands who have come before and alchemically combine them into a mishmash of winks and references. “Miss Teen Massachusetts” opens with a My Bloody Valentine-inspired cascade of gloomy synth before marching into a tight, swinging rhythm reminiscent of a sound Interpol mastered a decade ago.

Manhattan provides a single-perspective narrative of what it is like to be young in New York City, particularly on the not-so-cleverly-titled “To Be Young in New York City”, which tells vignettes of meeting friends, going to parties, and other banal details of cruising around the metropolis. Certainly not a new story, but lines like “A generation of jerks/ Directionless on our feet” suggest a level of editorial depth, that the banality of it all is also the point. Nods of self-awareness like this hint that an underlying intelligence informs the proceedings, but it’s never clear enough whether there is an overlying point.

But digging deep for meaning ultimately defeats the purpose of an album like this. That purpose being: Manhattan is fun, and like most fun things, it doesn’t need to be, nor necessarily should it be plumbed for depth. For example, why ask how the one-dimensional, up-tempo reggae swing (courtesy of The Clash) found its way into “Band Breaker”. In the end, it’s a rather pleasant homage to “would-be Yokos” and also a change of pace on an otherwise forcefully aggressive record.

Album closer “This Much I Care” captures the thrust of the album perfectly. It has the most compelling guitar hook, expertly intertwined with the propulsive rhythmic line, and tells the most aggressively vapid story of the album. It’s love via New York wealth and stature: “I don’t want you for your smile/ Or your delicate soul/ I don’t want you for your feelings/ Or for the the charm you own/ I don’t care about your body/ Or your massive heart/ You know there ain’t nothing special/ About anything you’ve got.” If you’re on the edge of your seat wondering what lead singer and songwriter Michael Ian Cummings does want, the chorus leaves little to the imagination, “I just want to go out for your money…” Well, there it is. Perhaps there is true value in capturing the shallow, empty soul of being young (and rich) in New York as succinctly as possible.

This is not to suggest that there aren’t moments of genuine inspiration sprinkled throughout. Cummings and his bandmates (guitarist Josh Hubbard, drummer Noah Rubin, and bassist Dan Burke) play a remarkably polished version of their garage rock predecessors. The compositions offer surprise twists and a number of memorable individual performances (Hubbard’s swaggering guitar riffs in particular). The measure of quality at play relies simply on whether or not SKATERS expect to be taken seriously as innovators. Fans of The Ramones, Interpol, and The Strokes are likely to find much to like here, as many of the bands’ aforementioned signifiers are spit-shined and repackaged for a new generation.

Essential Tracks: “This Much I Care”