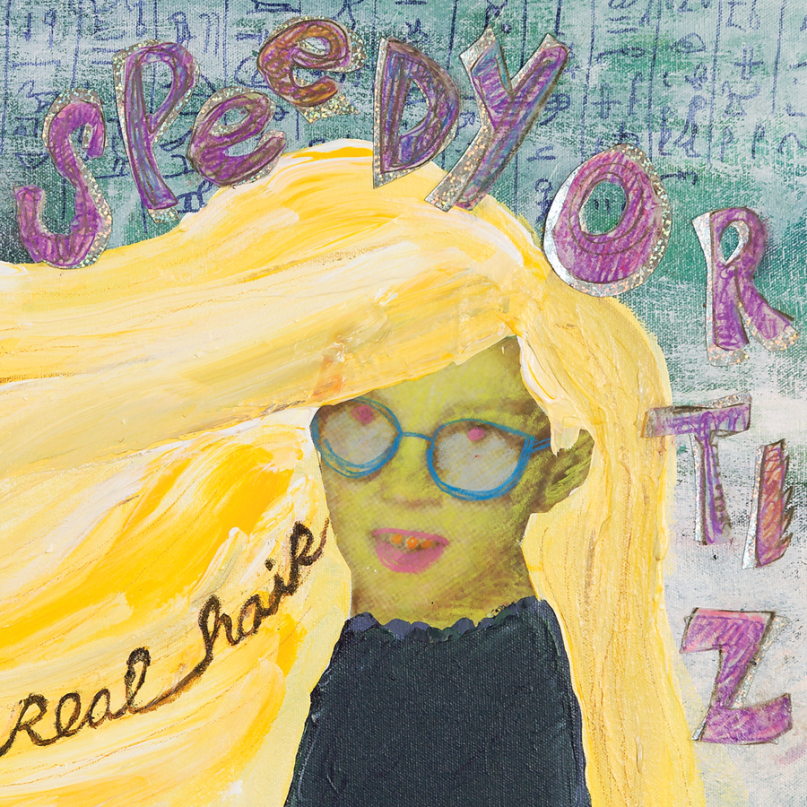 The deeper Sadie Dupuis looks into herself, the denser her music gets. As a poet trained at the graduate level, the lead songwriter of Speedy Ortiz draws upon language nimbly, dancing between lofty metaphor and slangy vulgarities. She’s as quick to invite listeners to suck her imaginary dick as she is to imagine herself as an aging racehorse (“Hitch”) or a lost swimmer freezing in a cold lake (“No Below”). Speedy Ortiz get a lot of comparisons to Pavement, but really they’re more Silver Jews. Real Hair, the EP follow-up to last year’s Major Arcana, is at the same time more introspective and exuberant. Poetic, self-reflective lyrics accompany Speedy Ortiz’s most raucous shade to date. Guitars bleed noise all over the thing; Dupuis is in top-form yelp mode. But while the music sounds great, there are still links to be forged between the band’s sound and the words inside of it.

The problem with diving deep into yourself is that it often comes off as esoteric when you report your findings to other people. On a shallow level, the EP keeps up a playful front: “Oxygal” sticks with Speedy Ortiz’s arcane superhero theme in title, and the chorus suggests another vengeful breakup song, both sweet and spiky in melody. But there’s a lot going on under the water here, and it doesn’t like to reveal itself too easily. Lines like “Who wants to sleep by her who death becomes/ Someone who sleeps with her neck in reverse?” would fit in better between the covers of a literary zine than here in an alt-rock record. It’s a line that wants consideration from a few different angles, and in “Oxygal” it just slips by on the way to the hook. The lyrics you remember on Real Hair are the ones that keep things simple: “Be in this picture, this picture with me.”

That’s not necessarily a bad thing, but sometimes there’s no clearing to get to after the tangle. The moment most able to be held onto on “Everything’s Bigger” is the statement “We head up to Vermont,” which doesn’t do much except maybe provide a literal analogue for the literary forest the EP tramples through. When read on the screen, the lyrics become a poem wanting line breaks. In the ear, they’re fleeting syllables. On the other hand, “American Horror” suspends a stable metaphor throughout its length. The words go down easy. Their meaning does not. Dupuis hits the mark of making something disturbing not by the difficulty of her language but by what the language describes.

I don’t think the language is the most important aspect of Speedy Ortiz, but I was a poetry major — I can’t help myself. The most important aspect is the energy, and in the moment of each song, the words are the fuel that the energy runs on. You can dissect each sentence if you like, but it’s a second layer to the work, an optional one. On its skin, Real Hair is dense, and hot, and lovely. It contains more musical ideas in one place than anything Speedy Ortiz has done before. Guitar nerds will have fun. Poetry nerds, too.

Back to Silver Jews for a second: the thing about David Berman is that while he is a poet, he doesn’t write songs like one. His lyrics sneak up on you. The songs work like poems in stealth; you don’t have to read the words on-screen to get the full effect. With her best songs, Dupuis marries the two sides of her craft. On Real Hair, they remain largely divided. That’s okay — Bermans are made, not born, and Speedy Ortiz has the self-awareness to box this off as a four-song bonus, a transitional work, a small step in a larger arc.