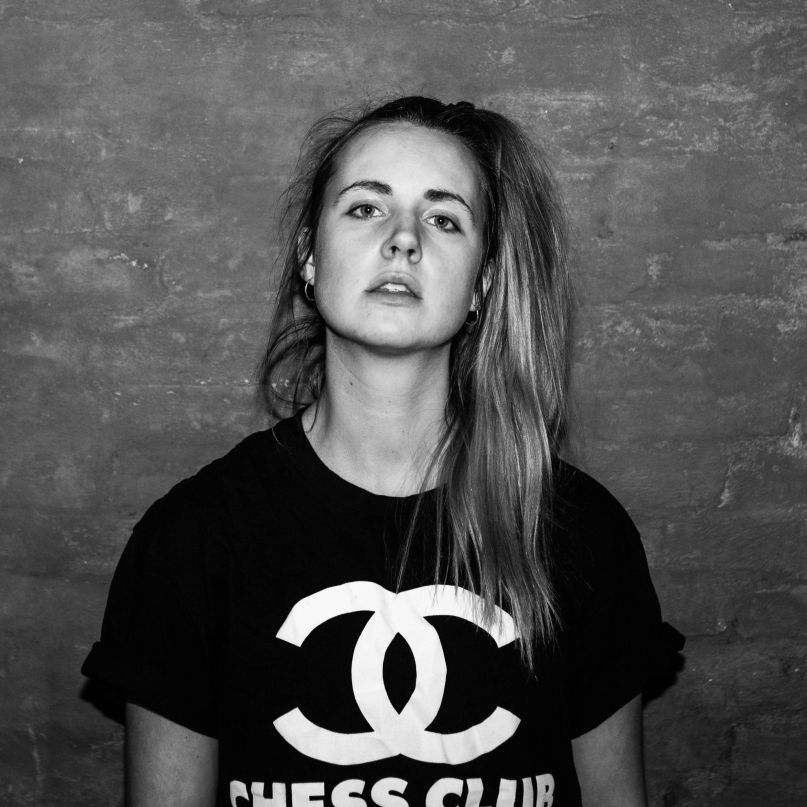 Karen Marie Ørsted, aka MØ, describes herself as “this Scandinavian mixture of pop girl, punk girl, and hip-hop girl,” and in the most basic terms, she’s right. Those divergent influences coalesce in her music, creating edgy and palatable pop music. From her debut single, “Maiden”, premiering on YouTube in May 2012, it was obvious that she was something fresh in an overcrowded genre. Over the next year and a half, she went on to release a string of successful singles, and now her debut album, No Mythologies To Follow, is finally finished and will see a March 10th release via Chess Club/RCA Victor.

During an especially cold day in Chicago, I huddled inside my apartment to Skype with MØ from her bedroom in her home in Denmark. She had just returned after performing at the Eurosonic Noorderslag Festival in the Netherlands. Despite the seven-hour time difference and a somewhat spotty internet connection, she was in good spirits, affable, and casually joking as if she was getting coffee with a friend rather than sitting down for an interview. She enthusiastically discussed her record, her childhood, and her recent marquee collaborations with Avicii and Diplo, as well as the joys and difficulties that come with growing up and figuring out who you are.

Raised in Odense, Denmark, Ørsted bought her first CD, The Spice Girls’ Spice, and like most kids experiencing the joys of pop music for the first time, it changed everything for her. It was the first music that I really felt I could relate to,” she remembers. “I felt like it was for me. They were these five characters — it was so easy to relate to when you’re a little girl.” Her childhood fascination with the pop group kick-started her desire to make music. With her English skills hardly developed, the seven-year-old still wrote her self-admitted “cheesy pop songs” in the language because that’s what the Spice Girls were doing. What could have been played off as what every kid tries (singing in front of the mirror and figuring out dance routines) turned out to be much more than that, as making music has been one of the true constants in Ørsted’s life.

When she turned 13, she became attracted to punk music and all that it represents. “Everything just went mad, and everything was turned upside down,” she notes of entering her teens. While she jokes that she had a great relationship with her parents then, she gravitated towards left-leaning activism and was introduced to Sonic Youth, who she says, “were and are still my biggest idols.” Her infatuation with punk seeped into her music, when she formed a feminist electropunk duo with her best friend, Josephine. They called themselves Mor and played multiple shows throughout Europe. As she talks, she turns her laptop to display handmade posters from her time in the group. Looking back on those gigs, she fondly remembers this time during which she became such an energetic performer.

Co-fronting Mor and “being very political lyrically” also led her to hip-hop. She says that in Denmark, “the punk environment and the hip-hop environment aren’t very far off from each other,” adding: “They’re left, left field, and both say, ‘Fuck society.’ They sum up the same messages.” And following her stint with Mor, she decided to sum up her own influences full-time with her budding pop alter ego, MØ.

For the uninitiated, MØ is pronounced “Moo,” translates to “maiden” or “virgin” in Danish, and is typed on a Mac keyboard using option + o. Starting the project in 2009, she rapped instead of sang, and admittedly focused much more on attitude than on content. “When [MØ] became what it is today, that was when I started to be more honest in the lyrics — saying the things I really want to say.” As she came closer to figuring out her direction, Ørsted scrapped the rapping and started singing, which suited the newfound introspection in her lyrics.

Honing her songwriting skills, her manager introduced her to producer Ronni Vindhahl. Noticing her colorful, personality-filled voice, Vindhahl gave her tracks with glitchy, percussive, electric guitar-heavy production. Her sultry singing matched the sleek allure of Vindhahl’s warped sound spaces, and their first official collaboration was “Maiden”. The team-up proved to be a success, with the song landing MØ a record deal. The relationship continued to flourish as Vindhahl produced her following singles and the entirety of No Mythologies To Follow.

For most of the songs, Ørsted recorded the vocals in a makeshift studio in her bedroom at her parents’ house and sent the tracks over to Vindhahl. “I’m so bad at being in the studio,” she says, laughing. “I really love doing it by myself, so I can get into the mood and the atmosphere, feeling the vibes.” Their Postal Service-esque methods still working well, the duo plan to keep working together in this way for any future projects.

With each successive single, like the slow-burning “Pilgrim” and the anthemic “Glass”, popping up on YouTube or SoundCloud, buzz began to spread. Many also began to inaccurately dub her as the “Danish Grimes.” Despite the rather lazy comparison — just for a couple of points of contention, her voices lacks Grimes’ airiness, and her songs are much louder — the hype allowed her to work with two of the biggest stars in EDM, Avicii and Diplo. Without even knowing Avicii, she recorded and wrote the vocal tracks for his dance smash “Dear Boy”, which ended up on his 2013 album, True.

Ørsted’s pairing with Diplo started even more organically — via Twitter. She was doing an interview with DIY magazine in the U.K. and remembers that “they asked me about my dream collaboration and I said Major Lazer.” Later, a guy wrote Diplo on Twitter, saying, “Please make this happen,” and he replied, “We love her.” Sure enough, they met for a recording session in Amsterdam and came up with No Mythologies to Follow highlight “XXX 88”. In hopes of getting Twitter to assist with another excellent team-up, she mentions, “I would love to work with Blood Orange,” adding that “he’s more fresh.”

To MØ, No Mythologies To Follow is “about being young in western society,” a key component of what pop music should explore. MØ explains: “A lot of the songs are also about being a teenager and being lost in society. It’s about being unprepared for life and being restless, being young and not knowing.” This idea permeates her music. While peppier songs like “Don’t Wanna Dance” focus “on the bright side of being young and confused,” the rest of the album pinpoints the panic, angst, and vertigo created by unbridled youth.

In another interview, MØ referred to this as simply “wander[ing] around in the woods,” and on “Waste of Time”, that idea makes perfect sense. She says of the track, “It’s about a teenage breakup and how everything is put on the edge. All your emotions are burning up inside.” There’s fire in the music video as well; in it, the singer finds herself lost in the literal woods and in a house. She explains the duality: “In the video, the house in a way symbolizes your body, your mind, and your soul,” while “outside is the real world.” The song’s raw bite perfectly captures this frustration.

Though MØ’s native Denmark is known for its strong social safety net and being “the happiest country in the world,” she disagrees with the assessment. “I can definitely understand why people say that, because in Denmark we get money for studying, we get money if we’re sick, we even get money [when we’re not able] to find a job.” But according to her, there are also a lot of people without anything to fight for. Saying Denmark is no different than anywhere in the western world, she adds, “There’s such a big pressure on you, with the media, social media preaching all the time about living the perfect life, glorifying eternal youth, beauty, fame, and money.” This means that “there’s not room for failure. Everybody wants to have success, and there’s that pressure.” Relating it back to her music, she says, “It’s very much about that, trying to find your own path through this crazy society that’s so filled with noise.”

Towards the end of our interview, she mentions how she’s looking forward to starting her tour with a full album to her name. When I ask what her new live show is going to look like, she talks about updating her visual performance and possibly bringing in a live horn section. Then, she pauses and brings it back to why she loves punk music. “I want to see something that’s true. The most important thing when we play live is to let go and try to be the music that we’re playing.” With her shows, she says, “You’re not hiding behind anything or hiding behind perfection. Fuck perfection. It’s about giving the audience a true experience, if you’re able to.”