by Zack Ruskin and Kristin Unis 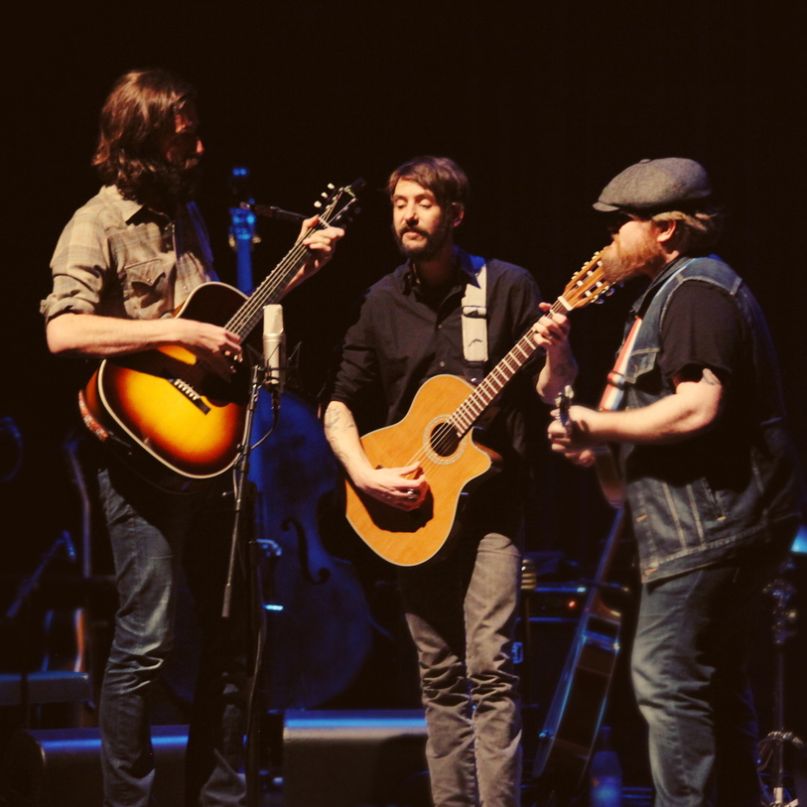 Valentine’s Day is never the right to time to see a show by your lonesome. It’s especially not the right time to see the lovelorn swoon of a Band of Horses’ acoustic show. My fiancé promised me I wouldn’t be ax-murdered if I worked on the holiest of all date nights, so I found myself surrounded by couples at the Palace of Fine Arts in San Francisco for the third stop on the band’s latest tour.

The set began with Ben Bridwell taking the stage solo for a rendition of “St. Augustine” off Everything All the Time, Band of Horses’ 2006 debut album. The tone for the evening—playful and informal—was set almost immediately. “This one does not go out to all the lovers,” he sheepishly declared. Lead guitarist Tyler Ramsey and keyboardist Ryan Monroe joined Bridwell for a three guitar version of “Part One” before the band’s remaining two members emerged for the duration of the show.

The band clearly enjoyed the forgiving context of the make-it-up-as-you-go acoustic format. Bridwell encouraged Ramsey to wing some splashy introductory notes to “Everything’s Gonna Be Undone” and Monroe added rollicking saloon piano solos to a number of songs. A group with a lesser repertoire might have failed to sustain the gimmick, but the campfire stomp that permeates the Band of Horses’ catalogue was made to be stripped-down and reconfigured.

Referring to their recent live acoustic album, Acoustic at the Ryman, Bridwell confessed to the crowd, “we didn’t know what we were doing when we recorded that, and now we don’t know what we’re doing either. It’s a weird-ass Valentine for you.”

Weird wasn’t the mood. Rather, the crowd was enraptured with the intimate, sincere execution of the band’s best tracks. The frequent banter between Bridwell and Monroe was a rare window into their working relationship, as the two traded good-natured barbs and off-handed quips over the course of the night. During the encore, Monroe misheard a song request shouted from the audience and began to play the furious intro to Temple of the Dog’s “Hunger Strike”.

“I thought someone said ‘Hunger Strike’,” he explained, abruptly ending his cover. “Be sure to put that on the setlist.fm – fifteen second cover of ‘Hunger Strike’; butchered.”

While I may have left my kind and patient date back at home (fear not, she had a wonderful Galentine’s sushi dinner), there was a lot of love to be had on Valentine’s night: love from the crowd for a talented band willing to play a small show for them; love between the members of a group who make the music they want and have found adoring ears to listen; and love for the beauty of real instruments, played with passion, on a small stage, with lots of heart. –Zack Ruskin

Setlist:
St. Augustine
Part One
Detlef Schrempf
Ode to LRC
Marry Song
Compliments
Older
Everything’s Gonna Be Undone
I Go to the Barn Because I Like The
The Funeral
Factory
Laredo
The Great Salt Lake
Weed Party
The General Specific
Encore:
Evening Kitchen
No One’s Gonna Love You
Hunger Strike (Temple of the Dog cover)*
Is There a Ghost

Forty-eight hours later, Ben Bridwell & Co. returned to their place of origin: Seattle, WA. As expected, the folksters put on an equally intimate show at the Moore Theatre, though the “hometown” flair certainly added a layer of intensity. Relive the entire night once more with our gallery below, courtesy of local photographer Kristin Unis.