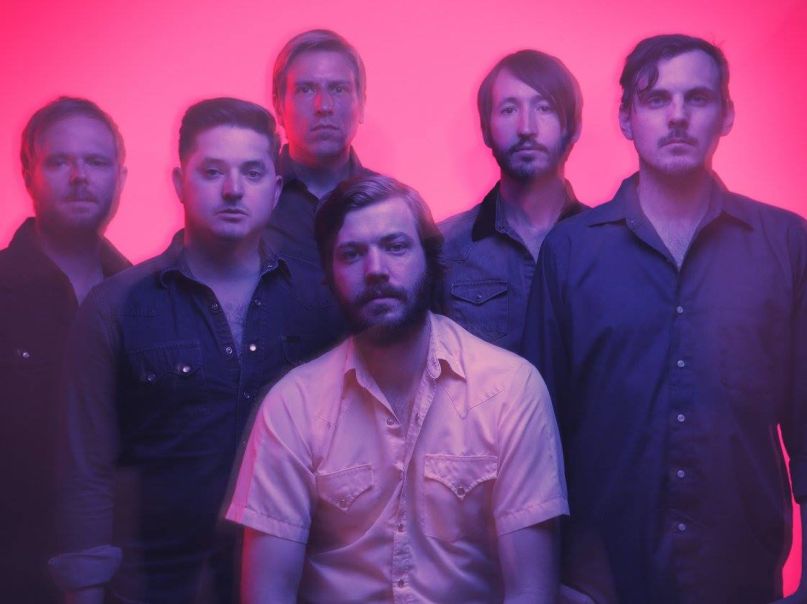 It was a cold, clear evening in London but the temperature quickly rose inside the shabbily plush O2 Shepherd’s Bush Empire as the locals soaked up some Texan sun. First up was Horse Thief, a five-piece originally from Denton, TX but latterly rooted in Oklahoma. Like fellow Dentonians and tonight’s headliner Midlake, the band is signed to London indie label, Bella Union, whose unerring aim was again on target judged on the strength of this performance. Fronted by heavily bearded singer-guitarist, Cameron Neal, sporting a sweater that could have come from the wardrobe of The Killing’s Sarah Lund, Horse Thief soon impressed with its rolling brand of psyche folk-rock.

Now and again the music carries echoes of the likes of The Grateful Dead, The Band or Neil Young, anchored by solid rhythm and filled out by rich keys. The tall, lean lead guitarist, Alex Coleman, added some chiming high phrases and slide figures and the set grew stronger as it developed with both “I Am The Bear” and “Devil” particularly standing out. Horse Thief appeared humbled by the genuinely warm reception afforded by a crowd who were unlikely to have known that much about the band beforehand. Even the lady sitting in front of me playing backgammon on her phone seemed appreciative.

Unlike the support, you sensed that most people here knew the music of Midlake intimately. The Texans have a strong bond with the UK and any suspicions that things might not be as familiar without founder member and mentor Tim Smith in the line-up were rapidly dispelled. Opening with the atmospheric “Ages” from album four, Antiphon, the immediately impressive thing was that the band actually could see what it was doing on a near-blacked out, smoke laden stage. As slanted rows of lights flashed upwards to interrupt the gloom the set became visually engaging, if a photographer’s nightmare, presided over by a giant representation of the Antiphon spherical cover art.

Now fronting Midlake, Eric Pulido commanded the stage from the start; his rich baritone arching over the elaborate instrumental patterns weaved by his band mates. Yet there was also the strong sense that this was a fully collaborative effort with all members being equal partners in creating a unified sound and presence. The set included the whole of the latest album, punctuated by highlights from The Courage Of Others and, to the audience’s deepest pleasure, The Trials Of Van Occupanther. While “Young Bride”, “We Gathered In Spring”, “Roscoe”, and “Head Home” from that seminal 2006 recording arguably provoked the strongest reaction, there was an equal sense that the newer material, if less immediate, is there for the long haul. Midlake cemented things further by choosing to throw two of the strongest cuts from Courage (“Ruler, Ruling All Things” and “Children Of The Grounds”) into the mix.

Guitarist Joey McClellan, a close rival to Horse Thief’s Alex Coleman in the thin stakes though comfortably outdoing him in terms of hairstyles, laid down richly compelling lead lines throughout the evening while Paul Alexander and McKenzie Smith provided a stoic yet always inventive rhythmic backbone. Set behind a broad console, Jesse Chandler added lush piano and organ plus some pastoral flute while Eric Nichelson deftly moved from guitar to a small keyboard and back. With three flawless harmonies to support Pulido, vocally Midlake served up an equally sumptuous feast.

An unexpected highlight came fairly early in the set in the shape of ex-Supergrass main man, Gaz Coombes, who joined for an exquisite rendition of “Young Bride”. Playing rhythm guitar, the Brit’s vocal meshed beautifully with Pulido’s for a brief but potent cameo. As the set progressed, the newer songs like the crescendo-building instrumental “Vale” began to show a looser feel befitting a band that initially came together as jazz students. It has overtones of progressive rock to it, though maybe that’s just a symptom of the musical dexterity of Midlake.

The set closed with “The Old And The Young”, a new song that feels close to the band’s core heritage, sharpened by guitar and keys stings over a solid backbeat. It led to a two-song encore, limited by the venue’s 11:00 p.m. curfew, with the delightful “Head Home” winging an ecstatic crowd in that literal direction. It was a triumphant show from a band that hopefully might grace these shores again at summer festivals. Mr Eavis, are you listening?