Live Review: Stephen Malkmus and the Jicks wig out at Chicago’s Lincoln Hall (2/20) 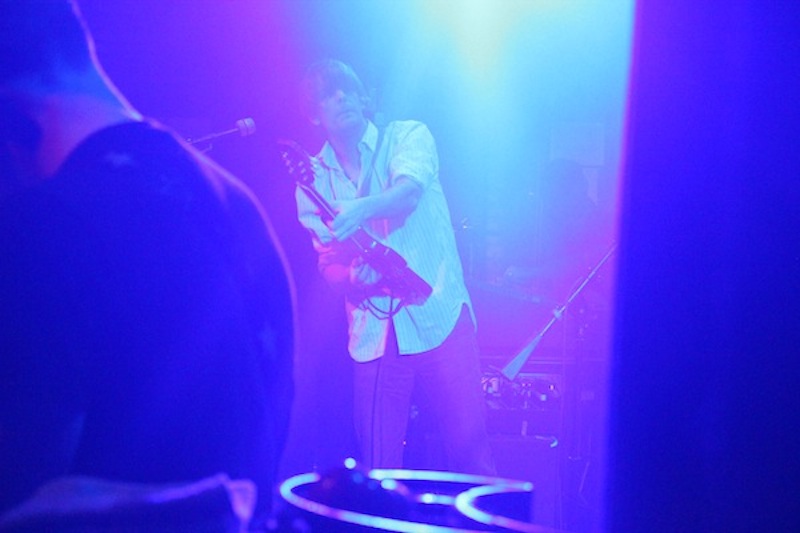 Throughout his celebrated career, Stephen Malkmus has seemed happiest when he’s performing with his band, the Jicks. Though his stint on Pavement’s reunion tour was by and large a success, there’s a comfort, ease, and freedom to his performances alongside the Jicks that many noticed was lacking during that tour. Now, with the Jicks outlasting Pavement in terms of being a band, and fresh off the release of their sixth engaging album, Wig Out At Jagbags, the 47-year-old has been enjoying this new chapter of being an indie rock veteran. Keeping that momentum with an assist from Chicago’s own Disappears, Malkmus and his band charmed the city’s Lincoln Hall on a extraordinarily wet Thursday night.

Never one to take himself too seriously, the indie rock statesman was affable and aloof the entire show. In the beginning of the set, he noted the rain-filled Chicago streets after Mirror Traffic opener “Tigers”, sarcastically saying, “There are a lot of puddles so let’s create sweat puddles in here.” From then, the band went through the new songs, mainly focusing on the Wig Out At Jagbags fare, like the propulsive “Planetary Motion”, the bass-heavy “Shibboleth”, and the goofy “Cinnamon and Lesbians”.

Age-wise, the crowd was especially diverse, filled with multiple generations who would probably lay claim to growing up “listening to the music from the best decade ever,” like Malkmus sings on Wig Out‘s lead single “Lariat”. With each song, smatterings of the audience enthusiastically clapped as he surveyed his discography with tracks like his debut’s “Jenny and the Ess Dog” and Face The Truth‘s “Baby C’mon” getting the warmest responses, not to mention the uproarious reaction to the band jumping into a Pavement song during the encore.

This being a Chicago show, Malkmus also tried his hand at some Second City-centric banter with, “This seems like a great place to see Wilco—intimate but not too.” He added, “I just want to talk about Wilco and the Blackhawks. You know, local things.” After all, he did use jagbags, a relatively obscure Chicago slang term for a jerk-off, in his latest album’s title.

Among the concert’s highlights was the Wig Out At Jagbags centerpiece “Houston Hades”, with its sing-along and cathartic climax, “Tearin’ it away!”, and its doot-doo’d melody, which in my opinion, rivals the one Crooked Rain, Crooked Rain‘s “Cut Your Hair”. It was also great to see Malkmus comfortably delving into some guitar theatrics, soloing and hamming it up. When Malkmus and the Jicks closed their main set with Pig Lib‘s “Us”, his guitar strap temporarily broke and his mic stand toppled over, but being the pro that he is, he kept on without missing a beat.

After a brief break, the band reappeared to launch into album-closer “Surreal Teenagers”. Pleasantly surprising everyone was a cover of Pavement’s Brighten The Corners standout “Stereo”, with Malkmus bemusedly noting, “I do like that blast from the past.” During the encore, he joked about Beck’s new album, “I hear NPR digs it.” His final song was a medley of Beck covers, going through “The Golden Age” and Midnight Vulture‘s “Debra”. Malkmus closed the medley adding in his arguably most recognized Pavement song, “Gold Soundz”, with the classic line “I won’t need you when I’m gone.” Judging by the the general mood emanating throughout Lincoln Hall, we need Malkmus to stay a bit longer.