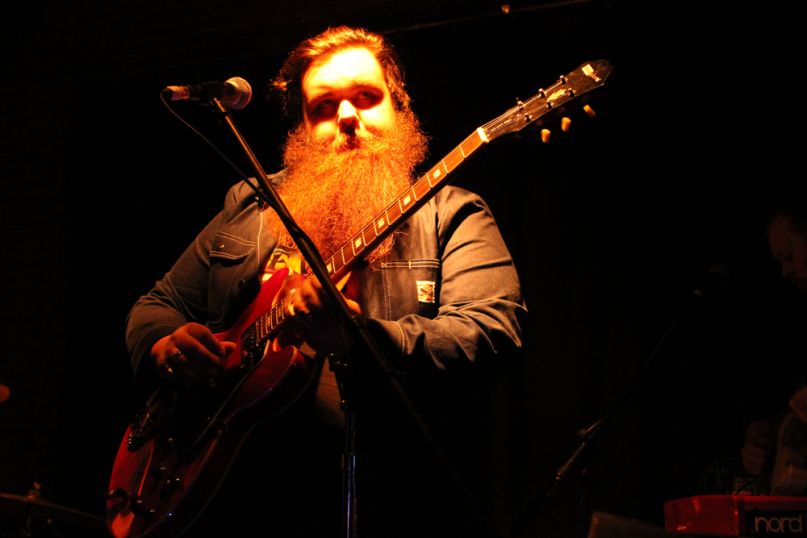 Backstage before the show, The Apache Relay gathered in a loose huddle, slowly raising their hands with a cheer. The band members then took their places on Bottom Lounge’s cramped stage among their guitar stands and amps. The tight quarters proved unfavorable for the six-piece band. The show took place at the venue’s upstairs room (not its main concert hall), so there was little leeway for maneuvering or interacting with the crowd during songs. It’s easy to see The Apache Relay thriving in a more spacious festival setting—they’ve opened for Mumford & Sons and performed at Bonnaroo. Given a little more room, the show may’ve been more dynamic and fluid.

The other bands on the bill—Promised Land Sound and The Lonely Wild—had less people on the stage and moved more freely. The Lonely Wild played a raw, loud set, which featured all sorts of funky configurations (three guitars, two drums or two trumpets in different instances) of their multi-instrumentalist members. Vocalist Jessi Williams even broke out a melodica. In one memorable moment, The Lonely Wild sampled distorted sound bites of their fans saying something about their lives while the band jammed in the background.

For The Apache Relay, who relied primarily on their last LP, American Nomad, to bear the weight of the headlining performance, the show felt promising, if lacking. The band showed glimpses of greatness in their 12-song, 48-minute set. They played a few new tracks (“Growing Pains”, “Valley of the Fevers”, and “Dose”) from their upcoming, self-titled sophomore album and relied on their extensive touring experience to power their more well-known songs.

Standouts included the pleasant harmonies of “Katie Queen of Tennessee” (the first single of the band’s new album), “Power Hungry Animals”, and the rollicking “Can’t Wake Up”. The Apache Relay gained their footing toward the end of their set with an excellent rendition of “Lost Kid”, as the crowd eagerly clapped along to the exuberant vocals of lead singer Michael Ford, Jr.: “All my life, all my life, all my life I’ve been waiting for you.”

The band closed with a cover of Shelby Lynne’s “Your Lies” and “Don’t Leave Me Now”. After tepid cheers from the crowd for an encore, the band quickly returned to play one more song, “Watering Hole”, despite the fact that three songs were designated for the encore on the setlist. But the band made the most of their farewell, finishing the track with an energetic, free-form jam and guitar solo from Mike Harris that showed off the vibrant chemistry The Apache Relay bring at their best.