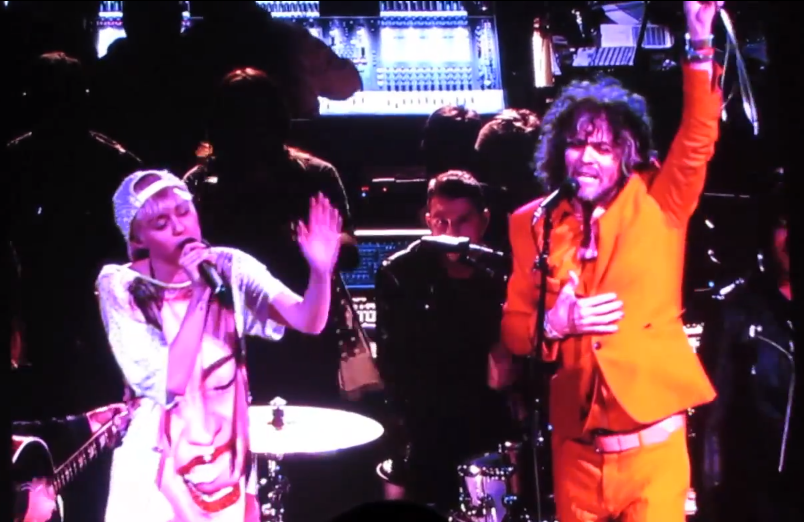 Miley Cyrus has pulled out some left-field covers as of late, like Arctic Monkeys’ “Why’d You Only Call Me When You’re High?” and OutKast’s “Hey Ya!”. But last night at L.A.’s Staples Center, Cyrus took it to a new level by not only covering The Flaming Lips’ “Yoshimi Battles the Pink Robots”, but bringing out the band’s Wayne Coyne and Steven Drozd to join her on stage.

The performance came on the precise 30th year anniversary of the Lips’ first show, making it a momentous night for both acts. The Lips got to celebrate their live debut, and Miley got to perform with, in her own words, one of her favorite artists of all time. “I’m so fucking excited. I don’t think you guys understand what this means right now. FUCK YES,” Cyrus called as she welcomed Coyne and Drozd to the stage. Wayne brought on a giant “FUCK YEAH” balloon and Drozd was draped in a red riding cape, while Miley wore no pants and a long t-shirt printed with her own face. It’s a sight to behold, and you can watch it below (via Stereogum).

In case you’re wondering, yes, this is the same night when Miley kissed Katy Perry from the stage. Girl just does whatever she wants up there, doesn’t she?