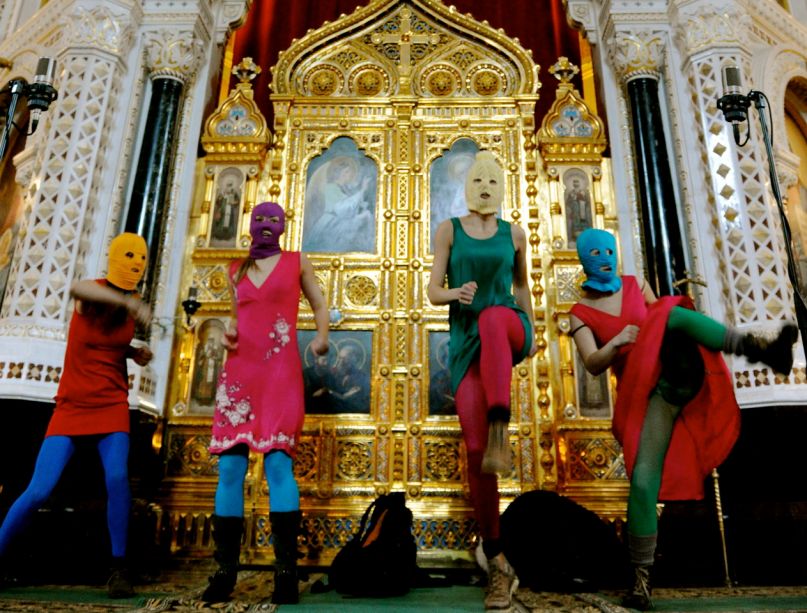 Exactly two years ago today, Pussy Riot performed “A Punk Prayer” at Moscow’s Cathedral of Christ the Savior, a protest event that would not only affect members of the feminist punk collective forever, but place Russian’s human rights violations in the global spotlight.

Five Pussy Riot members, donning their signature neon balaclavas, staged the performance on February 21st, 2012, in direct protest of Russia’s religious intolerance and President Putin’s close ties with the Orthodox Church. Though it was cut short by security officials, the incident was caught on film and eventually turned into the official music video for “A Punk Prayer”.

The collective was arrested and sentenced to two years in prison, charged with “hooliganism motivated by religious hatred or hostility”. Early on however, it was clear the group weren’t just run-of-the-mill troublemakers or momentary dissenters; their actions stemmed from something much, much deeper. Fed up with the way the Russian government went about its business — stifling freedoms of every variety, including religious, political, and racial — Pussy Riot finally had had enough and wanted the world to know it. They wanted to openly oppose and expose the country’s injustices no matter what the consequences.

And, over the course of the collective’s 21-month imprisonment the world did take notice. Politicans, activists, celebrities, musicians, and everyday citizens alike listened and voiced their support for Pussy Riot, repeatedly calling for their early release.

With the globe watching nearly every phase of the punk band’s grueling time behind bars — one marked by prison horrors and even a hunger strike — it wasn’t long before Pussy Riot and their isolated February 21st incident became the face of perseverance, representative of a tireless commitment to uphold and protect human rights not only in Russia, but across the entire world.

Even after their release, Nadezhda “Nadya” Tolokonnikova and Maria “Masha” Alekhina, two of the most outspoken members of Pussy Riot, have remained steadfast in their campaign to speak for the voiceless. The two have appeared at Amnesty International’s Human Rights benefit concert in Brooklyn and on The Colbert Report, promising to help improve the conditions of prisoners and raise awareness about “prisoners of conscience”, those jailed for their race, sexual orientation, religion, or political views. Recently, they, along with other members of the collective, were beaten and detained by Cossack militia following a protest in Sochi.

“You gave your voices to us, and now it’s our duty to give voice to those still in the dark,” Tolokonnikova and Alekhina said at the Amnesty International concert earlier this month. “The truth will always win, even if it dies in the battle.”

Below, watch raw footage of Pussy Riot’s historic protest two years ago, followed by the music video for “A Punk Prayer”.