Taking place on the 50th anniversary of The Beatles' appearance on the Ed Sullivan Show. 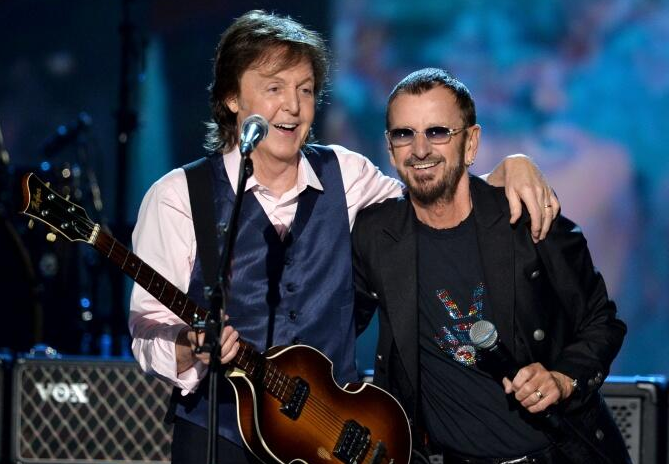 Yesterday, February 9th marked the 50th anniversary of The Beatles legendary performance on the Ed Sullivan Show. In tribute to that momentous event and its impact on music and musical culture, CBS aired The Night That Changed America: A Grammy Salute to the Beatles. The concert special was filmed on January 27th following the Grammy Awards in Los Angeles, but was broadcast at 8pm on Sunday to coincide to the minute with the exact anniversary of the Fab Four’s American debut.

Dozens of modern acts came out to show their respect for the band, including Dave Grohl, Pharrell Williams, Katy Perry, and Gary Clark Jr. The night also featured a reunion of Eurythmics as well as a joint performance from Paul McCartney and Ring Starr.

Dave Grohl displayed particular reverence, saying that he wouldn’t be in a band if not for The Beatles. “This is for my mom’s favorite band, my favorite band, and now my daughter’s favorite band,” Grohl dedicated his performance, at which his ear-muffed daughter stood on her seat and made a heart with her hands. Calling the track “a quintessential Beatles rocker”, Grohl and the house band (which featured Peter Frampton, Toto’s Steve Lukather, The Wallflowers’ Rami Jaffe, Don Was and others) played the Yellow Submarine song, “Hey Bulldog”.

Next, Annie Lennox and Dave Stewart reunited as Eurythmics. The new wave duo hadn’t performed together since their split in 2005, but reunited last night to “express their love for the Beatles.” The duo performed “The Fool on the Hill”, a song the Fab Four never played live as they’d ceased touring before its release. Lennox, in a stark silver dress and a near constant smile, proved her pipes and energy are as fine as ever as she danced and swayed with Stewart. Paul and Ringo were the first to rise to their feet as soon as the performance ended.

Later in the show, Pharrell, Brad Paisley, and Pharrell’s Grammys hat were joined by performers from Cirque du Soleil’s Beatles LOVE show for “Here Comes the Sun”. Surrounded by candle-holding hippies, Paisley and Pharrell delivered a faithful (if not mildly unexciting) performance while a troupe of rope dancers spun and swirled above.

Grohl returned to play drums behind Joe Walsh and Gary Clark Jr. for “While My Guitar Gently Weeps”. Clark and Walsh both showed why they’re both such highly regarded guitarists with a pair of incendiary solos. Grohl, on the other hand, took the “gently” part right out of the song title by furiously pounding away at his kit.

Jeff Bridges showed up to introduce “an outstanding dude and the most fabulous drummer of all,” Ringo Starr. Starr performed Carl Perkins’ “Matchbox”, and when he sang “I’m a long, long way from home”, Paul could be seen in the crowd saying “Yes, you are!” Starr also played “Boys” and “Yellow Submarine”.

Sean Penn was chosen to welcome Paul McCartney to the stage. After a brief introduction, McCartney and his band immediately went into “Birthday” to mark the 50th anniversary celebration. He went on to rock “Get Back”, “When I Saw Her Standing There”, and “Sgt. Pepper’s Lonely Hearts Club Band”.

Finally, Ringo came bounding onto the stage, mic in hand, to join Sir Paul for “With a Little Help from My Friends”. After going on for an extra round of the chorus, the pair paid respects to John Lennon and George Harrison, saying, “Whenever we play, they’re always with us.” With Ringo at the kit and Paul at his colorful keys, they performed “Hey Jude” for the closing song of the night. All the night’s performers came out to join on the iconic outro, and of course the crowd got into the action as well.

John Mayer and Keith Urban – “Don’t Let Me Down”

Alicia Keys and John Legend – “Let it Be”

Eurythmics – “Fool on the Hill”

Joe Walsh and Jeff Lynne – “Something”

Stevie Wonder – “We Can Work It Out”

McCartney and Starr – “With a Little Help From My Friends”