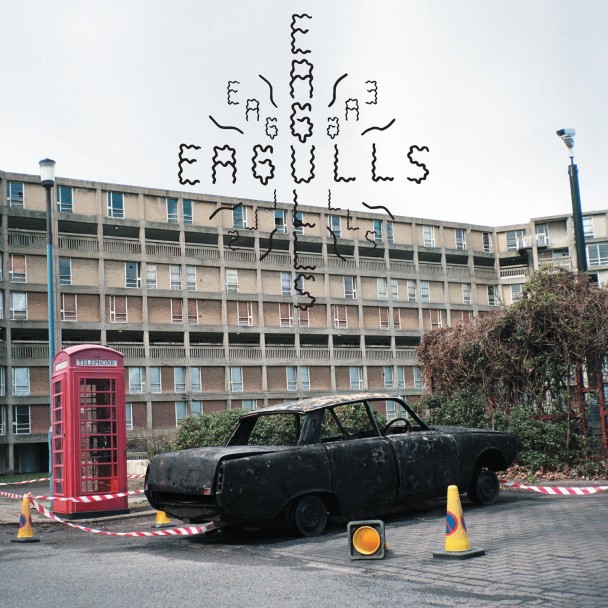 The old comparison test between English and American rock tropes can feel a bit trite, the geographical difference theoretically overpowered by the immediacy of the internet. But then the bronco-bustin’ album cover and sun-blistered drawl of Parquet Courts contrast so nicely with George Mitchell’s fogged over, jaw-clenched bark and the red telephone box on the cover of the self-titled from Eagulls. Both bands come to their insistent guitar music through punk, grunge, and indie rock, but the Leeds quartet daub some extra echo and clang on top of their messy, enthusiastic hooks, at times burying the differences between the set of 10 raucous tunes.

On Eagulls, the quintet burn through their influences, using the ashes to paint their own sound. At times, they inch up on glossy post-punk, but rather than pose coolly like early U2, the Eagulls are smashing bottles and flicking matches. This distinction manifests on the Cure-esque “Tough Luck”, Mark Goldsworthy and Liam Matthews’ guitars ringing and smoldering, the rhythm section keeping a frill-less, effective rhythm.

Throughout the album, vocals chase the rhythm section like a rabid dog, guitars providing the stifling heat that surrounds them. The misty “Opaque” and the concussive “Fester Blister” stand at opposite ends of the album’s spectrum, yet Mitchell’s minimalist, shouted delivery and the constant swarm of guitars make the distinctions relatively minimal. In fact, stretches of the album nearly overwhelm in their uniformity. The band surely know their strengths and have developed their sound, but the individual songs suffer when stacked on top of each other.

When they do make slight alterations to their sound, though, the album gets a shot of life. The melodic fall that Mitchell adds to some of the repetitions of the title of “Possessed”, for instance, shine far brighter than any of the other tracks with repetitive choruses. “Tough Luck” takes a left turn in its final act, delving further into the goth rock the first half suggested. These twists, though, are infrequent, and exploring them further could add some diversity to the promising, raw, muscular work here.