Elbow – The Take Off and Landing of Everything 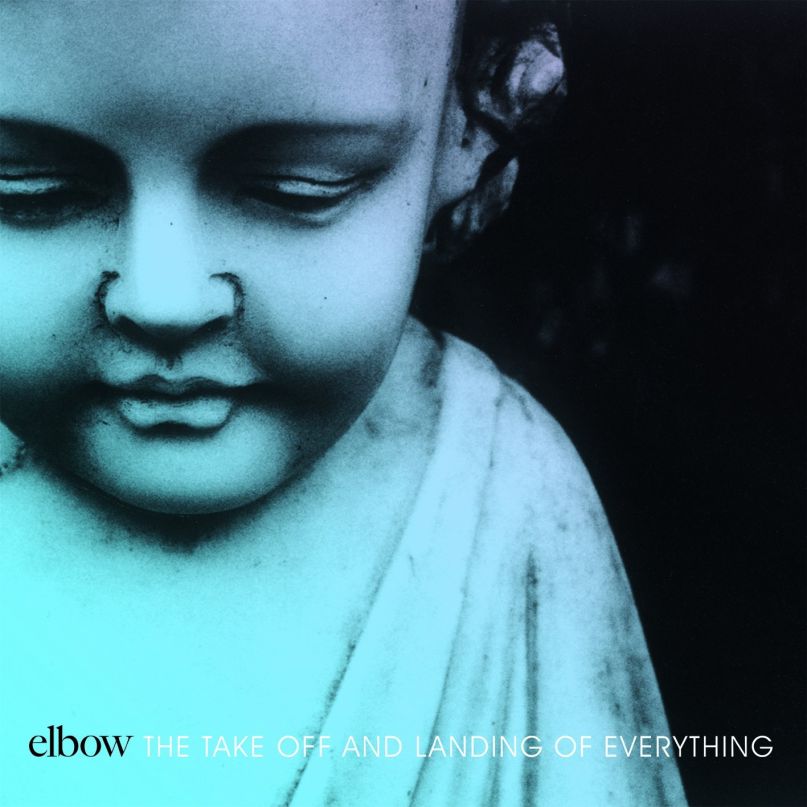 A few minutes into Elbow’s previous album, Build a Rocket Boys!, Guy Garvey’s appealing, tattered twang pleads, “Do they know those days are golden?” That boast exemplified Garvey’s ability to summon nostalgia while reflecting through his own adulthood. We’ve gotten used to this totality of Elbow’s lyrical warmth because Garvey tells stories that inspire us to acknowledge and accept the familiarity of our surroundings. He reminds us again to “go straight to the place where you first lost your balance, and find your feet with the people that you love.” And he’s done it again throughout their sixth studio album, The Take Off and Landing of Everything.

No one has the ability to request a personal overture of the burdens and blessings of being human quite like Garvey does, no one matching his ability to subtly explore beauty in the unremarkable details of human routine, and it really takes off when he injects a sense of hope into the world of black-and-white opposing ideals. Although painted with the same colors as previous albums, the resolution seems set higher, and Garvey sounds like someone experiencing spasms of self-reflection. It’s a mark of Elbow’s evolution as a band to let songs like opener “This Blue World” run for seven minutes. They aren’t trying to recreate the cultish anthemic bravado of their past.

The album’s addictive nature is such that only after a few listens did the revelation of Garvey’s breakup with long-term girlfriend, journalist Emma Unsworth, reinforce its most revealing lyric: “She and I won’t find another me and her,” he sings, poetic combat when whittled down with “I cannot stay where all the broken plans were made.” Emotional outbursts confetti the 10 tracks, and words like “dumbfounded” and “infamy” drop into the pitfalls of a love now lost, of a desperation to learn from it all and move on.

Garvey recounts his takeoff into a love that hovered over his head, and how he landed on earth at its end, shattering all the familiarity he had clung to. Though there’s a sense of familiar restraint mirrored by the music itself, the lyrics take the spotlight. “Newborn” resists taking an angry bite out of a defeated, hollow situation. In “Real Life (Angel)”, he begins with a proposition: “If you wake in the quake in the role of the heartbroken pounding the ground,” he begins, providing comfort by reassuring us the heart eventually starts to heal: “You’ll find a better mirror in another.” In fact, “Real Life (Angel)” alludes to a similar thematic energy as “Honey Sun”, Garvey being submerged in a cleansing ritual — a coaxing championed by baritone humming that spools him back to life.

But it’s “My Sad Captains” where Garvey performs open-heart surgery by giving a voice to those feelings, and damn if it isn’t lovely — a revitalising pump coercing nearly every indie ballad temperament in Elbow’s catalog. It states its case by overstepping the borderline gooey sentiment of telling inspirational stories and replaces it with a healthy dose of mid-life crisis. There’s the line about “plummeting like crippled crows,” he and his “sad captains” experiencing another sunrise after visiting a “BMX apothecary” and wasting time buying mind-altering drugs to which he chooses “to lose his mind.” If only Garvey’s song-surgery involved peeling back more layers that would reveal more than a development of the band’s sense of sound, but a bolder attack of thematic concepts.

Much of Elbow’s formula relies on our collective working memory of them, and even though Garvey has the ability to build enriching reflections of our world, they need to be sliced wide open in order for any further processing. It’s as if he’s dropped an effervescent headache tablet into the glass, when the situation calls for a roaring jolt from a defibrillator.

He takes a semi-bite in the song “Charge” by rubbing together complex drum instrumentals with fleshy drawl: “These fuckers are ignoring me, I’m from another century,” he sings, attacking the ideals of a drunk fortysomething who’s disconnecting with a generation’s inability to take charge of their own actions. This kind of projected audacity works in favor of an album that really doesn’t have much of it, despite it being about heartbreak. Even after relocating to New York for a fresh perspective (as outlined in “New York Morning”), his unoriginal tale bodes pale in comparison to any expected splashes of colorful texture. Instead he plays it close to the dull primary palette by outlining clichéd ideals of the city.

“Colour Fields” is probably the closest shave Garvey gets to a lyrical bleed, as the usual rhetoric to find your feet by spending time with the people you love gets replaced with him advising a bright girl to leave a dead town and head to “where color fields meets canvas and the picture breathes you in.” I wonder if this is his New York. The reality being that, whilst Radiohead arpeggios and ’90s guitar strumming throb around, the gauze-covered sentiments Garvey usually wraps his thoughts up in begin to stain through — an innocuous attempt to defy himself.

In a career predicated on being album artists showing the powerful link between repetition and expectation, Elbow appears to have hit a stride again. Amid crisis and heartbreak, Garvey manages to explore balance through both practical and destructive illusions of individuality, a concept congruent to extrapolations of Buddhist teachings, which must have inspired the unusual album artwork. Like the white line on life support, life itself needs to go up and down (otherwise we’d flatline), and Garvey understands this. Even though nothing qualifies as a radical reinvention of the indie rock wheel, the band reassures us that in order to live, we’ll have many takeoffs and landings.