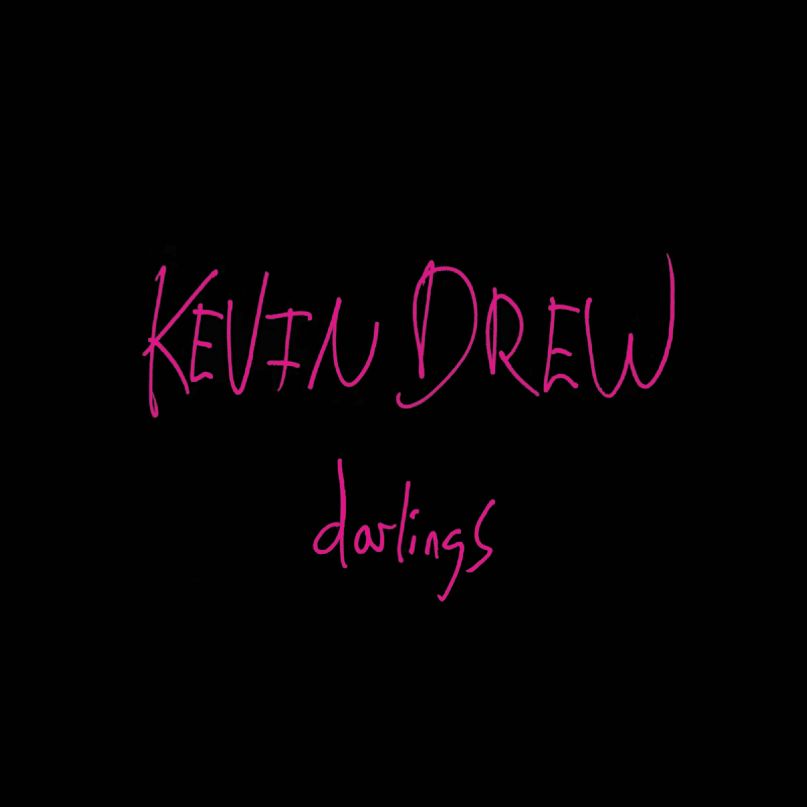 At 37 years old, Kevin Drew can be described as a world-weary optimist. Over 15 years into his career, his still-youthful songs revolve around love, reassuring the heartbroken and resiliently fighting for it. As co-founder and primary vocalist for the profoundly influential Canadian indie rock collective Broken Social Scene, Drew has been a constant for the group, staying a main songwriting force in their revolving door lineup. Though he sang, “I get world sick every time I make a stand” on the band’s last full-length, Forgiveness Rock Record, he still keeps on. After a period of intense exhaustion following Broken Social Scene’s 2011 tour and hiatus, Drew reignited his creative spark by writing songs with Canadian pop singer Andy Kim (who wrote The Archies’ “Sugar, Sugar” and U.S. chart-topping 1974 single “Rock Me Gently”). While their pairing resulted in a completed album that will see release sometime this year, Darlings, his second solo album, is a separate product created simultaneously with their collaboration.

Though Drew enlisted 23 musicians to collaborate on his solo debut, 2007’s Spirit If…, he keeps the musical framework tight on Darlings, only employing Broken Social Scene-affiliates Charles Spearin and Ohad Benchetrit, as well as Dean Stone of Apostle of Hustle and Dave Hamelin of The Stills. Because of this, Darlings is a tighter, more intimate affair that lacks the freewheeling jams and expansive wall-of-sound experiments of his output with Broken Social Scene. That said, the album doesn’t veer too far from BSS’s lovelorn temperament, as Drew’s strikingly personal lyrical content takes hold. As Drew is wont to do, this collection of songs takes lovesick and heartbroken moments and makes them soar with dreamy hopefulness.

A bright acoustic guitar opens the album on “Body Butter”, with Drew’s reassuring croon shining in. A lot of the album’s emotional resonance comes with the warm embrace of familiarity. Seven years since his solo debut and three since Broken Social Scene’s last record, Drew’s appearances have been measured and spaced to the point that any new offering is welcome and comforting. Drew’s laid-back coo on “It’s Cool” recalls some of the softer moments on Forgiveness Rock Record (“Sentimental X’s”) and 2005’s Broken Social Scene (“Major Label Debut”), with its unfolding guitar and celestial synth strings. Highlight “First in Line” displays Drew’s infatuation with memorable refrains, hypnotically creating one of the album’s dreamiest cuts. He relies heavily on synths and piano, only really coming close to rocking on kiss-off “Bullshit Ballad”.

Throughout Darlings, Drew searches for real human connection. He describes the album as being about “the rise and fall of love and sex, in my own life and in today’s society.” With the lead single, “Good Sex”, Drew aims to accomplish just that. Using repetition to break into a sort of instructional tone (“Good sex will never make you hollow/ Good sex will never make you feel clean”), he attempts to unpack lust and love through decades of hookups and relationships. Through each listen, though, the song manages to reveal extra layers of depth showing his disarming focus on the emotional rather than the purely physical. When he sings, “Well I’m still breathin’ with you baby” under glistening, electric guitar arpeggios, it’s a delicate moment of confession and clarity.

Over the years, Drew has described sex and intimacy in especially blunt terms (“I’m Still Your Fag”, “Tbtf”, and “Cocaine Skin”, to name a few). He never glosses over the messy details — not the bodily fluids, not the vulnerability, and especially not the physical closeness. On “My God”, he opens with “My God, I think I threw up,” and later asks, dumbfounded, “Did you really give up?” He wants to love and will always fight for it, unable to imagine a world closed off. Still, that world-weariness seeps in these lines: “Are you dreaming?/ What are you dreaming about?/ Cause I forgot.”

Along with “My God”, some of the best tracks on Darlings are squarely saved for side B. “You in Your Were” is perhaps the album’s most beautiful song, with lovely backup vocals from Leslie Feist and Drew’s haunting line, “You can run but you can never, ever live a lie.” Their vocal interplay instantly recalls the immediate chemistry of You Forgot It in People. These final songs heavily feature synths and piano, creating immensely affecting atmosphere. Closer “And That’s All I Know” swirls and soars with prominent piano chords, Drew’s voice room-filling as well as heartfelt. It’s a beautiful moment to end on and a perfect cap on an album full of such moments.

In an interview last year, Drew expressed some doubt about his relevancy: “My heyday was back in 2003, and now I’m trying to figure out where I fit in this 8,000-bands-a-minute world.” Unwarranted self-deprecation aside, his contributions with Broken Social Scene have established him as an all-but-permanently lasting figure in indie rock. And with an album as strong as Darlings following a string of consistent releases, it’s hard to think of Drew coming close to wearing out his welcome.

Darlings works, in many ways, as a culmination of Drew’s career so far. He’s been writing songs that reach these emotional heights since 2003, but as a unified statement, the album broadcasts his voice and vision, which is as clear and assured as it’s ever been. While it lacks the raw, jubilant catharsis of a Broken Social Scene release, Darlings is both understated and refined, showcasing the many facets of Drew’s romantic songwriting. As he’s getting older, Drew fortunately isn’t concerned with trying something drastically new. He knows his strengths, and the resulting album is a warm testament to his mature, stellar songwriting that just wants the world to love better.

Essential Tracks: “And That’s All I Know”, “You in Your Were”, and “First in Line”