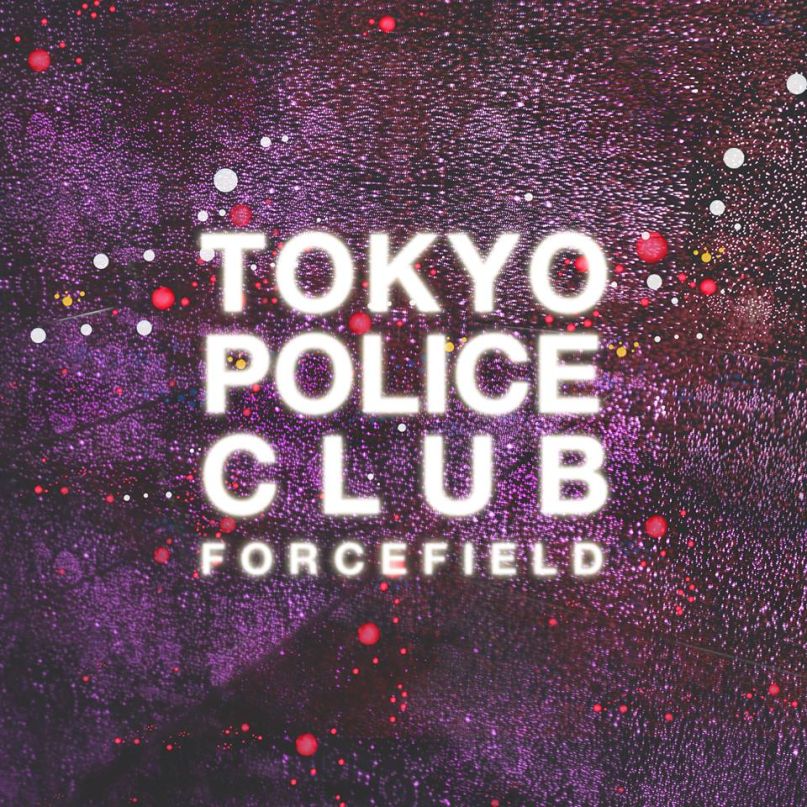 Canadian collective Tokyo Police Club have spent their previous body of work (two LPs and two EPs) painstakingly crafting a signature sound. It drew a little bit from rock and a little bit from post-punk, and it was unmistakably, completely theirs, a kind of touchstone for seemingly cool and collected college kids who were really just tangled balls of emotion. No other rock song had the same blueprint as “Sixties Remake” from 2008’s Elephant Shell, and there are few songs that I have loved quite as much as “Breakneck Speed” from 2010’s Champ. David Monks’ nimble lyricism coupled with killer guitar hooks produced albums perfect for repeat lineups, somehow both comfortably familiar and full of distinct wrinkles.

That’s what makes Forcefield, as a whole, so disappointing. Tokyo Police Club’s signature sound, the niche that they carved out for themselves in a constantly fluctuating music scene (an emphasis on rhythm and abstract, maze-like lyrics with real emotion at their center) is almost completely gone, replaced by a rabid pop sensibility that sometimes works and sometimes really, really doesn’t.

Once expectations are adjusted and its accepted that Forcefield isn’t going to be Champ Part II, the whole thing becomes easier to swallow. Album opener “Argentina (Parts I, II, III)” is a promising start. “When you smile, you smile with all your teeth at once,” Monks sings, and the song progresses from power pop, to an exuberant ode to brand-new love, to a kind of chill jam session, with some power chords thrown in for good measure. It’s a nine-minute odyssey, executed by a group that had mastered the three-minute song, and it renders a feeling of “I see what you did there,” but not much else.

“Hot Tonight” is clearly the tour de force here, the intended radio hit. Monks and company have talked half-seriously about how their goal with this album was to do what The Strokes did with “Juicebox” and Weezer did with “Hash Pipe”: use the rock riffs that came so easily to them to their advantage instead of pushing them aside in search of something more esoteric. While that’s fine in theory, there might be a reason why those two predecessors confined the experiment to a single song instead of an entire album. “We just wanted to write choruses,” keyboardist Graham Wright told Exclaim, and write choruses they did. “I need a countdown when the fire is high/ Sitting on the curb and it’s hot tonight,” Monks sings, and it sticks in your ears, but doesn’t need any further explanation. The album’s title is supposed to be a metaphor for the way the band tried to isolate themselves and reject the myriad musical trends that have come and gone since the release of Champ, but it’s likely tongue-in-cheek, too — this is inarguably Tokyo Police Club’s trendiest album yet.

Should Tokyo Police Club have to justify this dramatic shift in sound? The band’s Elephant Shell Saddle Creek heyday is largely over, and if a group that have been showing up for the last seven years want to ride the coattails of bands like Bastille and Imagine Dragons to some modicum of mainstream success, who am I to naysay? But all the momentum that the group had been building with A Lesson in Crime, Elephant Shell, and Champ feels thwarted here, diverted somehow, as if their label sent in bodysnatchers to create a band with the muscle memory of the originals, but the sensibilities of a radio favorite. “Hot Tonight” might start blasting from every car window this summer or it might not, and I’m not sure whether or not this gamble pays off really matters. Either way, Tokyo Police Club have staked their claim to a new sound and a place on the crowded airwaves, leaving longtime fans to look for something else to fill the void.