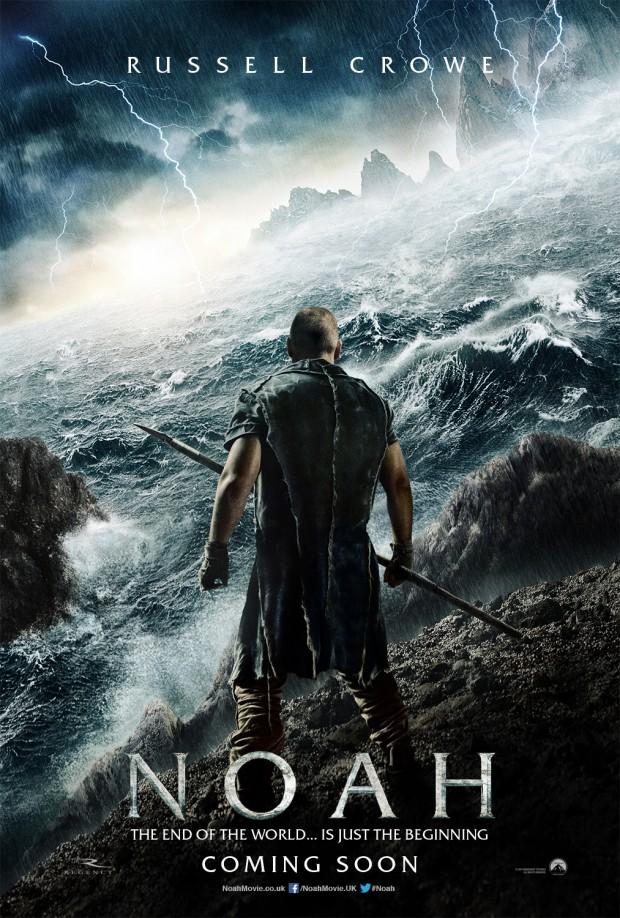 Noah as envisioned by Darren Aronofsky is probably not the version of the story of a simple man given a great task by a higher power that people who flocked to see Son of God on its opening weekend will be wanting. Aronofsky, to an extent, delves into interpretation of the Bible as parable and, beyond that, as the starting point for a traditionally-minded epic with some incredibly modern flourishes. The film is also at once a celebration of the miracles of religion and critical of its contradictions, ensuring that pretty much anybody combing over Noah for its larger implications will have something to be riled up about.

But, as spectacle, Noah takes an approach to its source material that reasonably balances speculative creative license with the sort of awe-inspiring setpieces that likely helped in selling Paramount on the whole endeavor. As Noah, Russell Crowe cuts an imposing figure, as is his wont; quite a bit of the controversy surrounding the film in anticipation of its release is the portrayal of Noah as an assertive, authoritative figure, rather than a noble follower. That would undermine what Aronofsky aims to say with the film, arguably, as Crowe’s Noah is very much a mortal. He’s the sort of mortal who makes for a different kind of parable, as it were, a flawed figure in a violently hedonistic time.

The basis is the same: Noah is a farmer and among the last in the line of Seth, the less-heralded third brother of Cain and Abel who chose to live decently in the eyes of the Creator. (The film never says the “G” word, though the Creator is spoken about and to frequently throughout.) With his wife Naameh (Jennifer Connelly) he has sired three sons: Shem (Douglas Booth), Ham (Logan Lerman) and Japeth (Leo McHugh Carroll). Through visions of water and the end of times, Noah learns that he is being compelled to build an ark to save animals when the slate is cleaned anew for humanity, and the many lingering vestiges of Eve’s initial sin are struck from the earth. What’s expected is what’ll happen before the flood comes, but what proves far more interesting is Aronofsky’s interpretation of exactly what took place on the ark after the world died.

The questions that Noah offers are interesting enough that they have the unfortunate side effect of undermining the more boilerplate parts of the film. While an argument could certainly be made that Aronofsky is working in legends and religious mysticism, retroactively justifying the film’s lengthy expository stretches and rote melodramas as part of the accessible larger allegory, it’s one that requires the viewer to accept the story without questioning the way in which it’s told. And the way in which it’s told, simply put, often makes for a boring movie, one that you wish would stop repeating itself in order to get to either its point or at least to Aronofsky’s occasionally visionary approach to the theological creation of everything. The film seems to be torn between these opposites, between the desire to make a Tree of Life-esque meditation on the first moments of all existence and a throwback to the crowd-pleasing biblical epics of yore.

And yet, when the film isn’t staging massive, droning battles or watching as its many supporting characters explain the story as it progresses instead of just telling the damned thing, Noah occasionally resonates with a surprising power and clarity. There is an earnestness to Aronofsky’s film, even as it takes to task the central conflict of the story of Noah, which is to say the idea that any one man was seen as being above corruption. To explore this further, Noah shows a remarkable willingness to linger upon the supposed savagery of early man for long periods. From orgiastic celebrations of overindulgence to the conflicts between parent and offspring, the film is unafraid to look with an unshaken eye at just how cruel and violent human beings can be to one another, and often have been. The film is less about the trials of man than it is about the absolute, undeniable beauty of the mysteries of the universe. It has little interest in offering anything substantial as answers to its questions, and in some respects proves rather skeptical about the potential of humankind to overcome its most archetypal weaknesses, but it’s still a philosophically far cry from Charlton Heston. Even if Noah is unremarkable as epic films with lots of destruction go, the sense of inquiry at its center will stay with you even if the movie doesn’t.