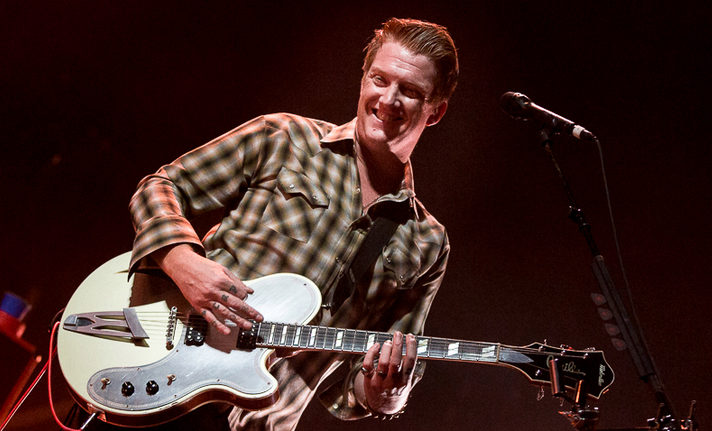 In the midst of Queens of the Stone Age and Nine Inch Nails’s co-headlining Australian tour, Josh Homme sat down to answer some fan-submitted questions for Australian music site FasterLouder. While some fans focused on the basics, like what advice he had for budding rockers and his favorite ice cream flavor (“Really, vanilla is the king shit of fuck mountain of ice cream flavors.”), others opted for harder hitting questions. Open and honest, Homme provided some insight into the controversies surrounding his former band Kyuss and his recent Grammys appearance.

In 2012, Homme and fellow Kyuss member Scott Reeder filed a lawsuit against their ex-bandmates alleging they committed “tradmark infringement and consumer fraud” by reuniting as Kyuss Lives!. A judge ruled in Homme and Reeder’s favor, causing Kyuss Lives! to change its name to Vista Chino.

Asked why he thought it was so important for “the new Kyuss” to change its name, Homme responded:  “I mean, even in that question: ‘the new Kyuss’. I like to play for respect and for passion. Things about money and things like that shouldn’t come into it… When you create something and you’re part of something, you don’t go back and tamper with it and toy with it just to make money.”

Homme continued by stressing the importance of preserving and protecting a legacy “if you’re lucky enough to have one.” “I’ve never been a big fan of reunions and sequels and stuff like that, because it really tramples what was for reasons that I don’t really believe in.”

Later, Homme addressed a question regarding the now-infamous “Grammy debacle” when his set with Reznor, Dave Grohl, and Lindsey Buckingham was cut short for commercials. Asked whether he’d ever play the awards show again, Homme said bluntly, “I’d play anywhere. I don’t care about the drama. I got misunderstood for something I said when I was reacting to someone in the audience recently. Not to mention I was really drunk,” he explained, likely referring to a recent Houston gig where he called out “fuck Imagine Dragons and fuck the Grammys.”

Homme went on, saying, “But the truth is that I’m a musician; I play my music, and I don’t really worry about the rest… I go and play my music. I don’t like to be disrespected, but nobody likes that.” So, finally, would he perform at the Grammys again? “Yeah, if they got their shit together, maybe. Maybe.”

He also touched on the response to …Like Clockwork, the possibility of future desert recording sessions at Joshua Tree (“I’d love to do more Desert Sessions, it’s just been difficult because of having a lot of music go on already”), and his current reading selections (Into Thin Air and K2). Watch the entire video below.