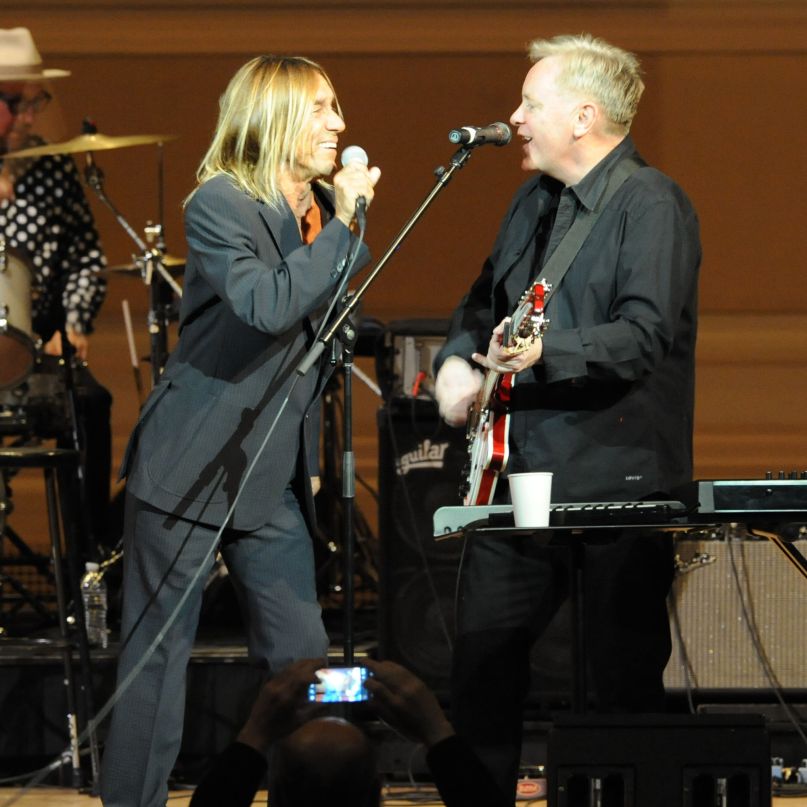 The Tibet House Benefit Concert is an annual gathering of some of the best and brightest talents in music for a collaborative night at Carnegie Hall. It’s also a big night on the social calendar for certain circles of New Yorkers, as evidenced by the high-class society feel to the show. Curated by Philip Glass, each concert is a truly unique event, and this year was no different. With musicians from all over the map, both musically and geographically, the crowd at this year’s event was in for a treat, and everyone lived up to their billing.

There’s always a chance for disaster at benefit shows such as these. As Glass explained, many of the artists who were collaborating at the show had only just rehearsed the day before or in some cases the day of. With that kind of short preparation, there can tend to be some sloppiness, especially when each performer only gets to play a few songs. Luckily, the talents on stage were so great that they overcame any obstacles in their way and most of them delivered flawless performances.

After the interesting mix of socialites, music junkies, and activists filled up the gorgeous Stern Auditorium at Carnegie Hall and the house lights dimmed, a group of Tibetan Monks from the Drepung Gomang Monastery took the stage and performed a mesmerizing traditional Tibetan chant. Opening speeches were then given by Tibet House vice-president Glass and president Robert Thurman to get things officially started. They reiterated why we’re all here – to support the people of Tibet – and thanked the artists and the crowd for their generosity.

Robert Randolph was the first artist up, and he kicked off one hell of a Tibetan New Year party. Joined by Patti Smith’s band and violinist Tim Fain, he tore through covers of “Bo Diddley” and “I’m Going Down” on his famous slide guitar. He looked as happy as anyone in the crowd to be on stage, and he probably jammed a little extra hard to extend his brief time on stage. While it was just a two-song set, it was a memorable two songs in a night full of memorable moments.

Next up was a stripped-down version of The National. Billed as just Matt Berninger and Bryce & Aaron Dessner, they ended up being joined by last minute addition Sufjan Stevens (piano and vocals), a trombonist, and the Scorchio string quartet. They played beautiful renditions of “I Need My Girl” and “This Is The Last Time” before bringing Nico Muhly out on piano to help them close with his arrangement of “Vanderlyle Crybaby Geeks”. There were some technical problems before the final song, and while they were fixing the problem, Aaron was noodling around on his acoustic guitar and Berninger deadpanned “This is called ‘Hotel California’.” In a night big on musical talent but short on comedy, this probably got the biggest laughs of the night. Once they fixed everything, they performed a truly stunning rendition of “Vanderlyle”. It was the start of a run of gorgeous sets that would feel right at home at Carnegie on any given day.

After the semi-National’s set, Stevens stepped from the background to front and center for a performance with Bryce Dessner and Nico Muhly from their joint “Planetary” project. They explained that this was the first time these arrangements had been stripped down to just three people, as they’re usually backed by many more musicians. Stevens added that he was invited by Nico and Bryce to join after all the initial announcements were made, and the crowd was appreciative of his presence. They played two songs – one about Neptune and one about Mercury. They were both lush, beautiful pieces that showcased Stevens’ unique voice.

After the two songs, Stevens and Dessner left the stage, and Glass joined Muhly on the piano. Both sitting on the same bench at the same piano, they played “The Chase”, a fun and driving song where the two supremely talented pianists matched each other step by step. Nico then left, replaced by Fain. The two have performed together all over the world and it showed — they had excellent chemistry. With Glass on piano and Fain on violin, they played two breathtaking pieces that could be performed at Carnegie over and over to sold out crowds. Fain’s talent on the violin is almost unfair – it was magical watching him perform. The two songs flowed beautifully into each other, with dramatic turns at every corner. This performance deservedly got the evening’s first standing ovations.

Tibetan musician Techung was up next after a tough act to follow, but he’s been around for all 24 of these benefit concerts, so he was unfazed. Beginning with a traditional Tibetan nomadic song, he played a short three-song set that was as interesting as it was fun. Using mostly instruments from his homeland, he got the crowd all clapping to the beat and had some people standing and dancing. His band (guitar, bass, hand drums, etc) was fun to watch and his fellow singer had a voice like I’ve never heard before, which was showcased in the nomadic song.

Then came New Order. Prior to their set, Glass explained that they’ve been trying to get the UK outfit for years. It was worth the wait, even though it wasn’t your average New Order set. With Glass on piano, they opened things up by backing UK poet Mike Garry while he recited “St. Anthony” – it was an engrossing and truly unique performance, and things only got crazier from there. Garry left the stage and was replaced with Iggy Pop, who proceeded to more or less front New Order for the next three songs. First up was a song they said had never been performed live before and claimed most people wouldn’t even know, “Californian Grass”. Even if people didn’t know it, the excitement of Iggy Pop & New Order made people go crazy… but that was just the tip of the iceberg.

Next up was Joy Division’s “Transmission”, which really got people up and dancing and crowding the aisles at the front of the stage and generally behaving like they weren’t in Carnegie Hall. I overheard some of the older patrons yelling at people to sit down, but there was no stopping it: people were going to dance and take pictures and go crazy and there was nothing the staff or anyone else could do about it. The madness reached a fever pitch when they closed with their all-time classic “Love Will Tear Us Apart”. Carnegie might as well have been CBGB’s at that point. The Carnegie crowd gave a full standing ovation for this monumental collaboration.

Iggy Pop stayed on stage as New Order exited to perform his own set with Patti Smith’s band (who were undoubtedly the MVPs of the night) and the Scorchio quartet. Somehow still having all of his clothes on, which consisted of a nice suit and vest with no undershirt, he addressed the crowd with, “I wanna play some songs I was singing when Joy Division was just starting out.” He then tore through the opening two tracks of his classic Bowie-produced LP The Idiot: “Sister Midnight” and “Nightclubbing”. He stripped down to his vest during the course of these songs, but still didn’t go full shirtless like usual – perhaps a sign of reverence for Carnegie Hall. The crowds went crazy for his songs, and then stood mesmerized for his “vocal interpretation” of Glass’ “Mishima Novermber 25”, joined by the composer himself on piano. This also included an amusing interpretive dance, as Iggy pranced around stage after he finished his vocals. Another great set resulted in another standing ovation.

Glass came into the next introduction with a saddened heart, as he spoke about the good friend they had all lost, Lou Reed, who had played the annual benefit concert four times. He then brought out Patti Smith with him as they played “Perfect Day” as a tribute to Lou, while Smith dedicated the song to “Lou’s wondrous wife Laurie.” Smith then brought out her daughter and her musical partner to accompany her in a reading of the Ted Hughes poem “New Foal” — perfect for a concert celebrating the Tibetan Year Of The Wood Horse. The big finale of Smith’s set came when she brought the full band out for most of the “Land” suite (including “Horses”) tied together with pieces of “Gloria” – a full-on explosion of rock and roll with Patti Smith killing it as the frontwoman. There’s a reason Smith got to be the closer; even when playing after one of the most legendary punk rockers of all time, she still found a way to show him up.

For the night’s ultimate finale, every single person who had been on stage at some point in the night returned to perform a riotous version of Smith’s “People Have the Power”. Smith still played frontwoman, but it was a total communal experience. With everyone in the crowd on their feet, and many of them crowding the stages and dancing in the aisles, the line between performer and crowd blurred and everyone was just in it together. Watching Matt Berninger share a mic with Bernard Summer, Iggy Pop share a mic with Philip Glass, and all the monks and musicians on stage together really brought the message of the song home. As it came to a close, Smith urged us to “use your voice,” and that’s a message that no one in Carnegie Hall that night will soon forget.