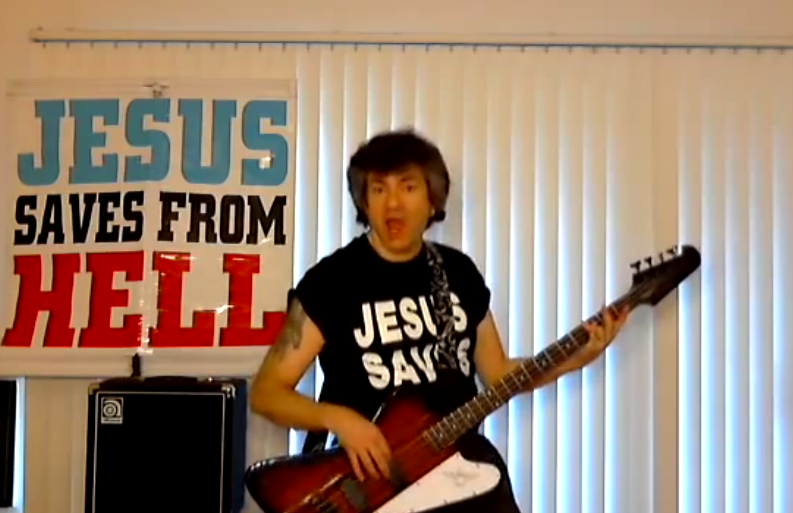 A few years ago, when I just started dating my future wife, we went to some Greek festival at a nearby park. What I thought was meant to be a day of scrumptious keftedakias, a few bottles of Mythos, and maybe some plate-breaking was ruined in one instance. There, on the stage on a hill, four middle-aged men came together in collective disregard for decency and absolutely ruined Foghat’s “Slow Ride”. I swore to myself then that their pitchy, horrendously cheesy version would be the worst cover I’d ever hear, even if I lived 100 lifetimes. That is, however, until now.

Across 42 videos, YouTube user Bold For Jesus (real name Patrick) uses rock and roll covers to preach the virtues of a righteous, Christian lifestyle, recounting how he “lived a radical rock n’ roll life for 10 years, and now I live radical for Jesus Christ.” (And if the covers are too subtle, he also spends a lot of time shouting his sermons.) Among his more recent covers is Led Zeppelin’s “Stairway to Heaven”, a staple of the modern rock canon and arguably Zeppelin’s most famous song. The resulting effort is, beyond a shadow of a doubt, the worst “Stairway” cover in history, and a clear candidate for worst cover ever.

Here’s why it’s a musical crime against humanity. If you don’t agree, I’ll buy you a small tropical island.

(Writer’s Note: The following condemnation is in no way related to the user’s religious beliefs. If you are a devoted believer of any faith, please follow your heart wherever it takes you. Just find another way to express your devotion other than making terrible music or ruining pop culture for the rest of us.)

— Hey, Patrick, it’s OK to actually pluck the bass. You’re not going to hurt it.

— Professional advice: Your “Robert Plant” is more “William Hung during a head cold”.

— He also might have stubbed his toe at the 5:01 mark. Or, he was just feeling the groove. Either way, don’t do that ever again.

— The smirk at the 5:43 mark may have been the exact moment Led Zeppelin was irrevocably ruined for me.

— Never mind; that moment actually came at the 6:28 mark.

— The 7:52 mark is less “climbing” pantomime and more “Help, I’m drowning in a sea of my own inferiority.”

Don’t take my word for it, though, watch the entire performance below. Oh, and be sure to stick around through to the end to watch him recount his most rock star moment when he “slammed a pie on top of a teacher’s head”.