Update: Two dead, 23 others injured after car plows through crowd at SXSW 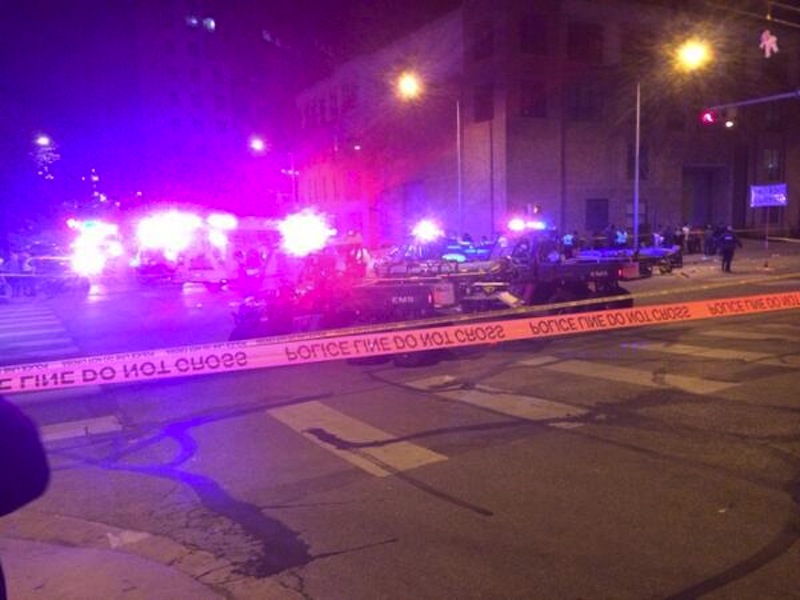 Two people died and 23 others were critically injured after a car ran through a crowd of people in Austin, TX, early Thursday morning, according to the Austin Police Department.

The incident occurred shortly after 12:40 AM CT near the downtown intersection of Red River Street and East 10th Street, just mere blocks away from the popular Mohawk music venue. The area in question had been blocked off to all vehicular traffic due to the current SXSW Music Festival, which began on Tuesday and ends on Saturday and draws thousands from around the world. Many of those hurt were presumably attendees of the event.

Police say the driver attempted to evade a DWI checkpoint when he turned the wrong way on Red River. The car, a grey Toyota, struck more than 20 pedestrians before turning onto East 11th and crashing into a moped and a van. One of the individuals riding the moped and a bicyclist were pronounced dead at the scene.

The suspect then jumped out of the car and attempted to flee on foot, but detained by police officers after being tased. He’s currently in custody and will be charged with two counts of capital murder and 23 counts of aggravated assault.

Update – 11:00am: In a press conference held Thursday morning, Austin Police Chief Art Acevedo said that of the 23 injured, two are in critical and three are in serious condition. 15 people have released from the hospital. SXSW is working to make changes to the venues and programming in the area surrounding last night’s events. However, all other programming will continue as previously scheduled. To cancel the events, according to Acevedo, would be “a victory for evil.”

Update – 7:00pm: The Austin Police Department has released the names of the suspect and victims. 21-year-old Rashad Charjuan Owens has been identified as the driver of the vehicle. According to the Austin American-Stateman, Owens had been arrested several times on misdemeanor charges in Fairbanks, Alaska, where he also currently has an active warrant out for him.

The bicyclist who was killed has been named as 35-year-old Steven Craenmehr. SPIN reports that he worked as creative director at MassiveMusic. The other death was 27-year-old Jamie Ranae West, an Austin resident who was riding on the back of a moped driven by Evan West, her husband. Evan is currently still in the hospital.

The names and ages of all those injured in the tragedy can be found on the Citizen Observer.

Organizers of SXSW have established SXSW Cares, a fund to assist the victims. To make a donation, head here.

After discussing with APD and city officials, the organizers decided that Mohawk and Cheer Up Charlie’s, two venues located at the scene of the crash, will reopen tonight at 7:00pm. SXSW founder Roland Swenson said in a statement, “After talking with the Austin Police Department, we have determined that the most prudent course of action is to move forward with the SXSW shows scheduled at the Mohawk and Cheer Up Charlie’s tonight. If we were to turn away potentially thousands of people who will arrive to see the shows, it would create a serious safety issue.”

James Moody, owner of Mohawk, also released a statement: “My staff and myself are broken hearted for not only the victims and families of this senseless tragedy but also for our beloved Red River and this entire community.”