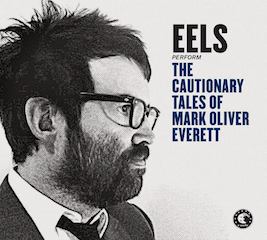 “Anxiety is love’s greatest killer. It makes others feel as you might when a drowning man holds on to you. You want to save him, but you know he will strangle you with his panic.” Perhaps quoting Anaïs Nin at a time and in a space like this (particularly while occupying a similar unseeing model of myself) may come across rather callow, encroaching on unreasonable even, but let’s be honest, as befits a friend.

Mark Oliver Everett, affectionately known to us as “E,” has been making music for 22 years, and on the 22nd of April released the latest offering from EELS. Though I’m a long-standing devotee, the project’s 11th album and I got off on the wrong foot. Granted, I dove in feeling swamped already by the sheer quantity of albums Eels have recently released (this marks a total of five in five years) and naturally wanted to flip through the songs of A Cautionary Tale of Mark Oliver Everett as one would the pages of a hand-drawn comic flip book — quickly and furiously. However, with every turn of the “page,” another frame flipped by depicting a rapidly dropping 10-ton Acme weight (followed by an imaginary sad trombone backing track). I was drowning from a surface listen like the character outlined by Nin — gasping for air underneath it all.

Nonetheless, let’s follow theme: I’m a strong swimmer. At a glance, the album is bookended by the opening track, “Where I’m At”, and the final plea, “Where I’m Going”. Even though the former sits sweetly as a wafty instrumental, it feels unnecessary. It lacks in depth and warmth and would be better suited as the soundtrack of a British TV period drama. The track is then repeated during “Where I’m Going”, but this time E slaps on some lyrics. The efficacy of his compositional vocabulary overpowers lyrics drenched in child-like sentiment fit for a musical: “Sunflowers shooting up to the sky that is glowing/ And I’ve got a good feeling about where I’m going.” On paper, that reads as truthful, but for some reason, on record, they’re kept by tempo and timbre floating above the surface. The melodic arrangement feels contrived.

In the end, neither of the tracks feels ultimately necessary. It would have been more hard-hitting to begin with “Parallels” because it deflects as a reference to his famed physicist father’s “many worlds” theory. Considering Everett’s fertile inclination to share, deflection is needed more than reflection. While the string arrangement on “Agatha Chang” sounds perfectly appropriate, his hesitant baritone breeds a sense of speculation. It feels too slight to stick.

The people behind the album are complicit in its stranded stature, as seen in the press release’s punted summary: “an introspective turn for E.” But isn’t E always turning inward? A “turn” denotes change. He’s turned older, sure; his head is turned on the cover of the album, yes, thank you. But E is singing about the same themes that he was singing about years ago, albeit he’s coloured them in with better production than on its predecessors (save Electro-Shock Blues, Daisies of the Galaxy, and Blinking Lights and Other Revelations, which remain unbeatable). So, to the rest, I call bullshit.

After 10 albums containing occasional bursts of solipsistic tangents, taking a turn would have meant wringing out every breath of angst and forgiveness he had to muster — not simple affectations like “everyday I live in regret and pain” during “Kindred Spirit”. If the music was meant to aid this journey of reconciliation for him, in between the swaying of folk-styled rhythms and soothing introductory chords, all it does is extinguish the fire he hoped to ignite. Melodically, “A Swallow in the Sun” begins with a similar intent but thankfully includes cymbal-led drumbeats. But I can’t help imagining hopeless scenarios of What Ifs. For instance: What if the garage rock guitars captured during Shootenanny were weaved into the same falsetto and scream found in Hombre Lobo?

Is it too late to throw in that his voice supersedes expectation? And, in hindsight, is this stripped-down, softer, and quieter songwriting his way of showing respect to the truths he’s so vulnerably trying to portray? Probably. “I wouldn’t answer each time the phone rang,” sounds more to me like the confessions of a teenager than a 51-year-old man bound by the tight knots he’s struggled to break free from for years. Everett’s gruff croon radiates in “Gentleman’s Choice”, which during Blinking Lights and Other Revelations was realized in the song “I’m Going to Stop Pretending That I Didn’t Break Your Heart”. The intimacy is certainly here, bolstered by additional instrumentals; clarinet, sax, trumpet, and cello pop in.

What The Cautionary Tales needs is a prudent pruning. This album struggles to appear deeper than a common puddle, and while E’s previous penchant for sharing has given him a brilliant book of songs from which to draw, I wonder how long he’ll stay floating on the surface, moving only according to the tides of the ocean around him, unable to reach a new destination. For E, the goal should be submerging further, one step further than the concept of introspection; he may be looking inward from the surface, but submerging would necessarily include unraveling bits and clawing deeper. I’m more intrigued to find out what he hasn’t been saying for all these years — not the repetitive staring down of monopolizing despair, mortality, and cosmic isolation all at once.

How’s that for existential crisis? Stuck on the edges of a never-ending philosophical spiral of ( f )eels.

Essential Tracks: “A Swallow in the Sun”, “Mistakes of My Youth”