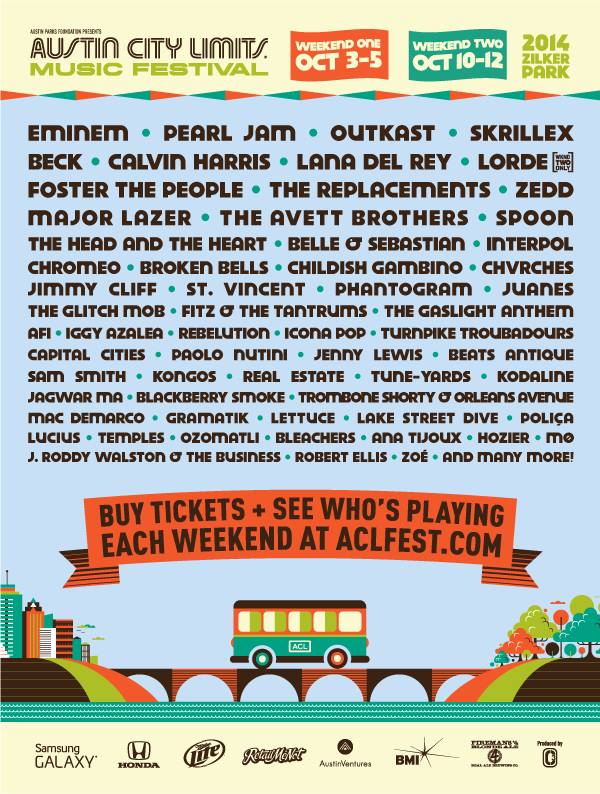 I love Austin, TX. Having spent four miserable years in Tallahassee, FL, I never thought I’d ever love another city in the South again. But man, there’s nothing like the Texas state capitol, what with their exquisite BBQ, trendy shops, bike-friendly atmosphere, and Torchy’s Tacos. Hell, our own News Editor Chris Coplan moved there prior to South by Southwest, and since then, he’s been much happier. No lie. He even bought a potbelly pig. Keepin’ things weird, right?

Anyways, when it comes to its other namesake festival, Austin City Limits, the city opens its arms once more for tourists looking to get away in the fall. Now, October has always been an odd month to throw a music festival, namely because it’s post-summer and several of the acts already have months behind them. Still, it’s the atmosphere that counts, and the way the terrifying Southern sun melts into a cool autumn breeze… there’s nothin’ like it.

This year’s lineup, like many festivals this year, has fans split. They love the idea of singing along with Eddie Vedder, and fear the prospects of running into a zoned out Skrillex fan. There’s something to love about them nabbing two hip-hop headliners, but also something unsurprising about them being Eminem and OutKast. As with any lineup, there are its highlights and omissions, its surprises and weak spots. Here’s how we cut it up.