Did Pharrell’s “Happy” video rip off a Girl Talk video? 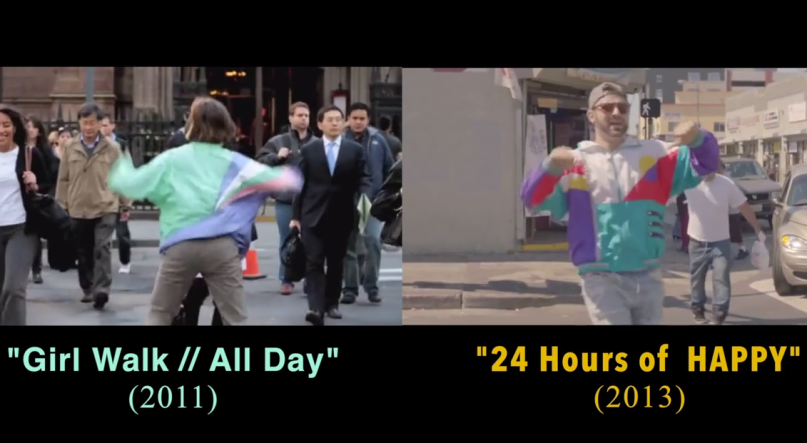 Last November, Pharrell Williams unveiled one of his most ambitious projects to date, the “world’s first 24-hour music video” for hit single “Happy”. While a mind-blowing endeavor — I can’t fathom doing anything for 24 hours straight, not even sleeping — it seems the bold concept behind the visuals might not be as groundbreaking as we all thought. Oof. As SPIN points out, the “Happy” clip bears a striking resemblance to the 2011 Girl Talk film, Girl Walk // All Day.

Released by the creative agency Wild Combination, Girl Walk // All Day is a 75-minute video that follows three New Yorkers dancing to the entirety of Girl Talk’s 2010 album, All Day. Does the “storyline” ring a bell? If you’ll recall, Pharrell’s “Happy” clip follows everyday folks, as well as celebrities, busting their moves left and right for an entire day. The uncanny similarities certainly drew the attention of the Girl Walk camp, with one of film’s stars, Anne Marsen, going so far as to make a video comparing the two pieces of work side-by-side.

“[Director] Jacob [Krupnick] and I were saying, and I were saying, we agree, it’s a great thing that dance is getting recognition as a long-form kind of thing, because we want to be making more projects that we’re dreaming up now that are in this form”, Marsen told SPIN. “Yet at the same time we feel like we’re not getting the recognition for this.” Watch her video below.

Greg Gillis, the mastermind behind the Girl Talk moniker, was not involved in the making of Girl Walk, but offered his two cents in the matter, saying, “Yeah, there’s definitely some similarities.” But like Marsen, he was careful with his words, stopping short of explicity accusing the “Happy” creators: “It could be a coincidence or maybe somebody in Pharrell’s camp was influenced by the video. Do I think the Pharrell video used those elements in a transformative nature and created something new out of it? Yes.”

Responding to the brewing controversy, a representative for Pharrell spoke up to say that neither Pharrell, nor the team responsible for “Happy”, had seen Girl Walk, and insisted that the music video was simply based on the film Despicable Me 2, which features the song.

Honest mistake? Or is there something fishy going on here? With thousands of hours of content being added to this crazy, intangible space we call the Internet, it’s eerily surprising and not that these incidents — where one party claims cluelessness about songs, videos, etc. they’ve been accused of copying — keep happening. It’s worth noting that when Pharrell’s video was first released last year, both Slate and Indiewire mentioned Girl Walk in their respective posts. Cue the Law & Order ::dun dun:: sound.